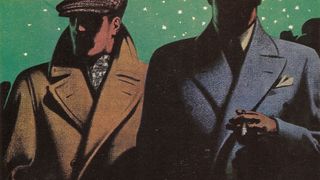 These vintage posters prove that we still have plenty to learn from the poster design of decades gone by. The idea of creating posters to advertise products harks back to the 1870s, thanks to the development of the stone lithographic printing process by French artist Jules Chéret.

Prior to this, it was only possible to print black and white text. The new process meant brands all over the world could turn their marketing ideas into striking, colourful vintage posters. The new approach shot to popularity, and was soon being used to promote everything from movies to drinks. Here we round up the best vintage posters that have stood the test of time.

Alphonse Mucha began his artistic career painting theatre sets, before eventually trying his hand at advertising illustration after relocating to Paris in 1887. In 1894, he was visiting a print shop that urgently needed a poster to advertise a new play starring the famous Sarah Bernhardt. Mucha's lithograph design attracted much praise and attention, and Berhardt was so impressed she began a six-year contract with the artist. The above vintage poster was one of many created during this time.

His 1914 poster for Kaffee Hag is a brilliant example, instantly selling the notion of decaf as a cup of coffee that won't turn around and bite you with side-effects.

The advent of the motor car in the early 20th century provided new opportunities for poster designers in the form of roadside advertising hoardings, as well as new challenges: how do you get your idea across to people in fast-moving vehicles?

Ukrainian-French painter and poster artist Adolphe Jean-Marie Mouron (known as Cassandre) rose to the challenge with this 1932 poster for Dubonnet, designed to be read and understood from cars whizzing past at high speed. Cassandre also introduced the idea of serial posters; a set of posters placed to be seen in quick succession, in order to convey the full message.

Perhaps one of the most well known vintage posters of all time, this iconic advertisement for the Parisian entertainment establishment Le Chat Noir was created by Swiss-born French Art Nouveau painter and printmaker Théophile Steinlen.

It epitomises the Bohemian, Art Nouveau style and cabaret culture of late 19th century Paris that stemmed from the legendary venue, which in its heyday served as an artists' salon, music hall and busy nightclub.

Back in 1967, leading Central and South American airline Braniff International Airways underwent an image overhaul, along with new brand colours and aeroplane designs. Following its redesign, the company merged with Panagra Airways and released a series of fun, whimsical posters advertising its destinations.

This poster for Argentina features an Argentinian gaucho. A cultural icon, these country people lived off the land north of Patagonia, and were the South American equivalent of the North Western Cowboy.

Swiss graphic designer Max Huber worked with numerous advertising agencies throughout his prolific career. However, he is perhaps best known for his seminal poster for the Autodromo Nazionale di Monza 1948 Grand Prix. His typographic style relied on grid theory and is committed to a clear, bold and rational aesthetic. Many of Huber's logo designs are still in use today.

Perhaps one of the most iconic images of the 20th century, American graphic designer J Howard Miller's beloved Rosie the Riveter was designed to boost morale during WW2. This vintage poster is still used today, and has been re-modelled for use on everything from modern feminist texts to tattoos, as well as spawning numerous parodies. Miller's bold illustrative style mirrors the comic books popular at the time and defined an era of advertising.

These gorgeous travel poster designs were created by artist Geo Dorival in 1928. The minimalist design features a silhouetted countryside, through which a single road leads your eye to the big, beautiful mountain in the French Alps that it's promoting. Dorival created three different versions – day, night and dusk – and all are equally striking.

American artist David Klein designed and illustrated dozens of posters for Howard Hughes’ Trans World Airlines (TWA) during the 1950s and 1960s. In 1957, this stunning TWA poster of New York City became part of the permanent collection of the MoMA (Museum of Modern Art) in New York.

In many of his designs, Klein used bright colours and shapes in an abstract style to depict famous landmarks and scenes of cities around the world. Best known for his influential work in the field of travel advertising, Klein's iconic images are much imitated.

Jean d'Ylen created this beautiful vintage poster in 1928. The design draws inspiration from the work of Italian poster art designer Leonetto Cappiello. Much of d'Ylen's work features large, colourful images on a contrasting background – this striking beer poster being a prime example.

Renowned fashion illustrator Rene Gruau's artistic career began in the 1920s and continued right until his death in 2004. Gruau created a vast library of chic fashion illustrations, including pieces for Miss Dior, Vogue and Elle. His distinctive aesthetic, with strong lines and stark contrast, made him a favourite in the haute couture world.

It's impossible to talk about American poster design without mentioning Edward Penfield. Often referred to as a master of graphic design, it was during a school exhibition that Penfield's work was first noticed by the art editor of Harper's Magazine. The artist would go on to create no less than 75 posters for the magazine .

Born in 1896, Hermann Kosel studied at Vienna Academy of Fine Arts and began his artistic career as a portrait painter at the age of 24. For a while, his work was focused around creating commercial travel posters for various companies. This one highlights the beauty and culture of Austria.

In the late 19th century, the popularity of absinthe coincided with the increase of large lithographic advertising posters as a commercial and artistic medium. Some of the greatest artists of that period created vintage posters for the alcoholic beverage, including Belgian poster artist Henri Privat-Livemont, who illustrated this iconic Art Nouveau Absinthe Robette image in 1895.

Poster artist Leonetto Cappiello became a household name in the early 1900s after producing nearly 1000 eye-catching advertisements for various campaigns. Probably his most famous is this beautiful Parapluie-Revel poster. The design features three figures blown about by a storm while the Revel umbrellas stand firm.