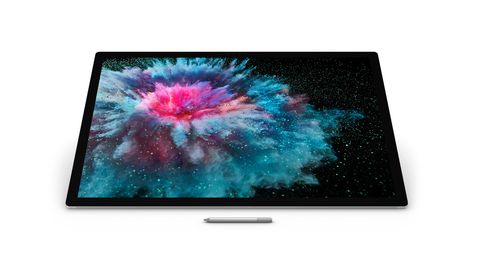 As an all-in-one drafting table, creative centre and home PC, the Surface Studio 2 ticks all the boxes. For digital creatives in particular, it is one workstation that's going to be hard to beat.

This is a hands on review of the Surface Studio 2 to give you the chance to see what the new all-in-one desktop is all about as soon as possible. We'll be expanding and upgrading this review shortly with more information and a score.

The all-new Surface Studio 2 has finally arrived, and early impressions are good, to say the least. The team at Microsoft have pulled out all the stops for the shiny new version of their all-in-one desktop PC, focusing in particular on digital media artists.

A robust digital drafting table with all the capabilities of a regular desktop PC, this machine will undoubtedly be desirable to artists and designers. But it's by no means cheap, so before you go breaking into your piggy bank, let's go under the hood in a little more detail.

The Surface Studio 2 is now readily available all over the globe, with prices starting in at $3,499 in the US and £3,549 in the UK. This will get you a 7th-generation, Intel Core i7 processor, 16GB of DDR4 memory and a 1TB NVMe SSD. So, like we said, it's not cheap, but is still significantly cheaper than an entry-level iMac Pro, which will set you back $4,999/£4,899. Having said that, the two aren't really comparable, being that the iMac can't be used as a graphics tablet.

With the incredibly pin-sharp 28-inch 4500x 300 resolution PixelSense touch screen responding to every deft stroke, chunky daub or precise click, the Studio 2 opens up a new world of creative opportunity. The thin display of the Surface Studio 2, along with lack of parallax and lag, puts you closer to the pixels than ever before, making for a much more authentic experience.

The Surface Pen experience has also seen an improvement, with pixels and the stylus tip really converging into one, without parallax or lag, even when using sweeping quick strokes. If there was a disconnect in this department, it would be very hard to look past, so it's great that this element of the creative process lives up to the other design features. However, an increase in pressure sensitivity and a way of charging the Surface Pen up on the side of screen would be welcome additions.

Couple the stylus experience with the still magical ‘gravity hinge’ on the Studio 2, which allows you to effortlessly lower the screen to a 20-degree angle, but still supports you as you lean across a drawing, and you've got a unique digital creative experience.

Though huge in size, the screen moves very easily around a table, just like moving paper on a desk, and yet doesn’t feel like it could slip or be pushed away accidentally when in use. Whatever angle you choose to work at, the screen has enough resistance to comfortably work on – again without fear of untimely slips or lowering. Knowing you can lean across the screen when it's fully lowered without fear of rogue touches or breaking the display makes for a very involving and natural experience.

The ability to switch instantly between colour profiles from sRGB to vivid and DCI-P3 modes is a massive help. Knowing that what you see on screen in sRGB is what will be printed provides a lot of confidence when setting palettes out correctly. Knowing that DCI-P3 is there too means if you ever want to develop more into film-making and editing for a YouTube channel, for example, then you're covered on that front, too.

The bump in power on the new Surface Studio 2 means you can be confident it can handle whatever you throw at it too. And in terms of design, aesthetically, it is still one of the most beautiful machines on the market.

Despite all the positives, there are areas for improvement that hopefully we'll see with the next iteration of the Studio. Other stylus companies have pushed the sensitivity levels of their pens to over 8,000 levels, which is around double that of the Surface Pen. For most users this wouldn’t be too noticeable, but if your job day-in-day out is drawing, these subtle delicate levels do become apparent.

Also, the lack of recharging of the stylus is a bit of a let-down, and will bother some more than others. The AAAA batteries are cheap and easily found online, but if you draw a lot, you'll find they don’t last as long as you’d like, and so the option to magnetically charge the pen on the side of the screen, like other companies offer, would be great. The Surface Pen is lovely to use and accurate, but hopefully a new version is on the horizon with the next iteration.

Another issue is the lack of options to upgrade the hardware, which may be a concern if you are truly at the bleeding edge of graphics, 4K rendering or just into that kind of tinkering. It would also be great to have the option of using the display as a separate monitor – just in case the computer element of the machine breaks in some unrepairable way. Having such a beautiful screen become redundant in years to come because of hardware issues would be a huge shame, so this could be addressed too.

For freelance digital artists working from home, the last thing you want is multiple machines replicating what, in essence, should be a natural drawing experience akin to painting on a canvas or doodling on paper. The Surface Studio 2 allows artists and designers to streamline their creative process into one machine that can happily produce complex graphics and paintings just as comfortably as it can office admin and Netflix marathons in 4K resolution.

As an all-in-one drafting table, creative centre and home PC, the Surface Studio 2 ticks all the boxes for both studio or home-based artists and designers. For digital creatives, it is one workstation that's going to be hard to beat.

As an all-in-one drafting table, creative centre and home PC, the Surface Studio 2 ticks all the boxes. For digital creatives in particular, it is one workstation that's going to be hard to beat.