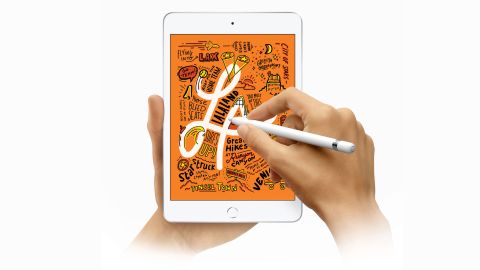 While not quite as powerful as the iPad Pro, the latest iPad mini is a convenient and sturdy tablet that's ideal for creating on the move.

After Apple launched two new iPad models in early 2019 – a new 10.5-inch iPad Air model and a fifth-generation iPad mini, both supporting Apple’s Pencil stylus. Add in the latest 10.2-inch iPad and there’s now a busy lineup of Apple tablets to choose from, at a range of sizes and price points. And don't forget, if you want to pick up a cheap Apple tablet, check out our guide to the best iPad Pro deals.

For some illustrators, the iPad mini may be one of the more interesting additions to the family. It’s super portable – just 300g and 7.9 inches across. It’s small enough to fit into almost anything and take anywhere with you. Now that you can use Apple’s Pencil with it, this means you can combine a powerful digital tablet with a highly sensitive stylus. Check out your other drawing tablet options with our guide to the best drawing tablets.

Combined with the brilliant range of drawing apps that are available for iOS – Procreate, ArtRage and SketchBook to name but three – and the iPad mini is clearly a unique creative product.

The downside of this portability is, of course, a smaller screen area. Drawing on a larger tablet is a completely different experience, and perhaps better for more complicated work.

And it’s worth highlighting that the new iPad mini only supports the first-generation Pencil, which is just as precise as the newer stylus, but lacks its magnetic wireless charging and double-tap action. (Note that the newest version of Apple’s stylus still only works with the latest iPad Pro.)

There’s zero compromise on performance, though. This latest version is the first iPad mini update in four years, upgrading its ageing Apple A8 processor with the powerful A12 Bionic CPU and coming with 3GB of RAM and either 64 or 256GB of on-board storage.

Rest assured, the device will be more than capable of running even the most advanced illustration tools, and its high level of performance will no doubt be welcome when Adobe launches its reworked Photoshop for iOS later this year, which will bring the whole experience of drawing much closer to the desktop experience.

That includes full support for layering and a cloud-based file system that will enable you to put the tablet down and then pick up wherever you left off on your PC or Mac.

There have been a few other subtle changes, too. Although the iPad mini’s external design and bezel sizes remain unchanged since the very first model in 2012, and the screen has the same 2,048x1,536 and 326 PPI resolution as last time, it’s now fully laminated. This is better for working in sunlight, supporting Apple’s True Tone image-adjustment and P3 wide colour.

Although the more powerful iPad Pro remains our first choice for illustration, it’s expensive. The iPad mini is significantly cheaper and a more portable device, but we realise that screen size is about personal preference, and what you think you’ll be using a tablet for. You could also consider the new 10.2-inch iPad.

Certainly, for sketching duties while out and about, Apple’s latest mini is more than up to the task in hand.

This article was originally published in ImagineFX, the world's best-selling magazine for digital artists. Subscribe to ImagineFX.

While not quite as powerful as the iPad Pro, the latest iPad mini is a convenient and sturdy tablet that's ideal for creating on the move.