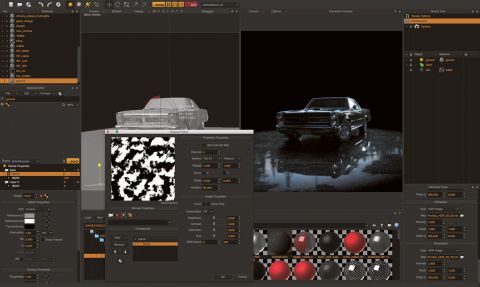 Not much has changed, but the addition of Multilight and GPU rendering mean that Maxwell 4 ought to be your new go-to renderer.

Maxwell Render has long had a reputation for its high-quality results, but at the expense of speed. However, this latest version demonstrates that Next Limit has listened to its users, adding major speed enhancements alongside many other changes.

The majority of time lost while working on a CG project is usually down to test renders, either looking at lighting or checking materials. In recent times, a couple of different solutions to this have arisen.

The first option is some kind of fast interactive preview, where the user gets to see a lower-quality preview that updates as the camera is moved. The second is to free up the CPU and use the power of the GPU to drive the render.

The benefits of GPU rendering are many, but essentially boil down to the cost/speed relationship. GPU cores are far less expensive to add than CPU cores, which means it's favourable to shipping a project out to a farm and is scalable too.

Maxwell takes advantage of this in version 4, with support for GPU rendering on PC, but not on Mac. It looked for a while like support for the physical sky would be constricted to the CPU, but luckily GPU rendering can cope with Maxwell's excellent physical sun and sky system. However, the Maxwell Hair tool is not supported yet.

When it comes to actually using Maxwell, not a huge amount has changed. The interface is still slick and simple, belying the power on tap. Setting up a scene is easy, with meshes being used as scene lighting, via a corresponding material. You can light with the dome, image or physical options, or combine multiples. But it has to be said that Multilight really comes into its own when you have emitters in the scene.

Multilight is Maxwell's now-standalone tool for re-lighting scenes during or after the render. In essence, you have a cache for each light source, and can change the intensity or colour of using a set of sliders. This can be applied to physical skies as well as material emission. A few minutes spent here can save you hours.

The material system is just as intuitive: Maxwell materials are easy to construct, all using the same editor, with different types adding layers for type changes, like light emission. The system is based on physical materials and is similar to the camera system and scene control, which is set up like a real camera.

The beauty of the images, with the speed advantages in Maxwell 4, make it a contender for king of the renderers.

Not much has changed, but the addition of Multilight and GPU rendering mean that Maxwell 4 ought to be your new go-to renderer.