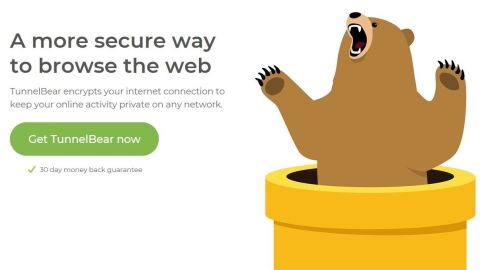 TunnelBear is a great VPN platform if your primary focus is privacy, connection stability, and high speeds. Unfortunately, it doesn’t go far beyond that. On the more positive side, the desire to prove its qualities through an independent audit is commendable.

TunnelBear was established in Toronto, Canada seven years ago and bought by cybersecurity company McAfee in March 2018. It prides itself with a user base consisting of more than 25 million people all over the world, and has found a place in our roundup of the best VPNs in 2019.

There are just two pricing options. The one-month option costs $9.99 (about £8), while the price of the one-year option stands at $4.99 (about £4) per month. TunnelBear also offers a free account, albeit very limited, with only 500MB of allowed VPN traffic per month.

Although this is not enough for most users, it is nevertheless an opportunity to test the service out and see if it’s the right fit for you before committing to one of the paid options.

Both plans can be purchased using MasterCard, Visa or American Express, and the provider also accepts Bitcoin as the method of payment for the annual subscription option.

A 30-day money-back guarantee is offered if any unsolvable problems with the service arise.

TunnelBear doesn’t really excel with its server count. Specifically, it provides access to an undisclosed number of servers in only about 20 locations.

Its list of features is also somewhat limited, although it does include the standard mechanisms like a kill switch. The provider gave its kill switch option a catchy name - VigilantBear, as the term kill switch 'sounds like a switch you activate manually in an emergency'. VigilantBear can be enabled in the client’s settings and it automatically stops your traffic in case the VPN connection is interrupted for any reason, thus protecting you from unencrypted data leaks.

The split tunneling feature called SplitBear gives you complete control over which apps will be directed through the secure and encrypted VPN connection, and which you want to leave on your regular Internet connection. Such apps include any that may restrict VPN access, or which you trust with your location/IP address, or any apps that might need your local IP address to work properly. That said, SplitBear is only available on Android devices running on Lollipop (5.0) or later.

Additionally, the GhostBear feature prevents outsiders from ever finding out that you’re using VPN software. Specifically, it changes your VPN traffic signature to appear as a different kind of traffic to third parties, like your ISP or government agencies. To accomplish this, GhostBear uses a technology called Obfsproxy which alters a number of identifying features like the size of packets or the order they’re sent in. All this means that the outside snoopers can’t block your VPN traffic. Having said that, GhostBear currently isn’t available on iOS devices, due to the restrictions in the way iOS is designed.

TunnelBear has a blocker feature for Chrome and Firefox extensions, which blocks simple ads and many types of online tracking that ad blockers tend to ignore, prevents fingerprinting, and facilitates faster website loading.

TunnelBear supports up to five simultaneous VPN connections with one account. If you were hoping to increase this number by installing the service on your router, you’ll end up disappointed as this provider doesn’t support routers.

TunnelBear offers strong protection of your privacy thanks to the encryption tools like the 256-AES algorithm and connection protocols that include OpenVPN and IKEv2.

TunnelBear's no-logs policy is pretty clear and detailed. It assures that it will not collect, store, or log any of your sensitive data, like IP addresses, DNS queries or online activities while using its services.

Unlike most other providers, TunnelBear has opened its proverbial doors to independent auditors, who have confirmed the quality of its security features for the second time in a row.

TunnelBear provider delivers superb results performance-wise. Not only does it connect very quickly, with the VPN connection remaining stable the whole time during its use, but it also facilitates top-notch download and upload speeds.

Although slight latencies can happen when trying to connect to servers in locations further away from your own, they don’t diminish the overall impression of the superior performance.

Unfortunately, TunnelBear’s servers aren’t capable of defeating Netflix’s VPN blocking mechanisms. The same goes for BBC iPlayer and is one of the biggest disadvantages in the VPN business as many users look for a service that can provide them with uninterrupted access to these geographically restricted services. Geo-restricted YouTube content, on the other side, can be accessed with no issues.

TunnelBear supports unlimited sharing of large files via torrenting clients on all of its servers. The performance, however, can sometimes depend on the server selected which is why you should contact the company’s customer service if you encounter any problems or need advice on which server to use.

The list of supported platforms isn’t a long one. Beside having clients for Windows, Android, Mac, and iOS, the provider offers only limited support for Linux. It doesn’t support routers, any gaming consoles, Apple/Android TVs, Windows mobile devices, or e-readers. Browser extensions can be downloaded for Chrome, Opera, and Firefox.

The clients for Mac and Windows can be installed from the TunnelBear website, while the iOS and Android apps, as well as the Chrome, Firefox and Opera extensions can be downloaded via their respective app and extension stores.

TunnelBear’s help section has a search box where you can enter the term you seek, or you can browse help topics according to their categories. If the support section fails to provide you with adequate information, you can contact the company’s friendly customer support staff.

Clicking the Contact Us link in the help section will take you to another page where you can describe your problem. Unfortunately, the provider doesn’t have a live chat feature, which is another disadvantage.

TunnelBear is a great VPN platform if your primary focus is privacy, connection stability, and high speeds. Unfortunately, it doesn’t go far beyond that. On the more positive side, the desire to prove its qualities through an independent audit is commendable.