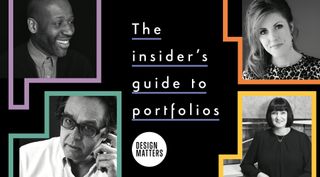 Design portfolios can be tricky to get right. No matter how many portfolio examples you've looked at, sometimes it's hard to apply the amazing inspiration in front of you to your own work.

So what is it exactly that top design executives are looking for in a portfolio? And what – in turn – might your next interviewer want to see from you? We spoke to designers at Pentagram, Superunion and BMB to glean the seven tips below. We also spoke to Michael Johnson at Johnson Banks. For his insight, see our separate list of his portfolio dos and don'ts.

01. Tailor it to the reader

“It’s vital to tailor your design portfolio (or book, as we call it) to the company you’re sending it to,” explains Louise Sloper, head of art at BMB. “So you’d approach an advertising agency like mine, for example, in a different way to a design studio. You’re unlikely to be doing 60-page brochures here, so it’s a waste of my time seeing that in a portfolio. It may be lovely, but it shows you haven’t understood the job that you’re coming for.”

“It’s kind of a weird thing,” says Pentagram’s Eddie Opara. “Often, one project in a portfolio stands out, because it’s something one person clearly didn’t do on their own; but there’s no acknowledgment of the other collaborators. I don’t normally mention it, but that doesn’t mean I don’t notice it.”

Sloper also wants to see your work in as much detail as possible. “My biggest bugbear is when portfolios are created as if they’re presentation boards, and the pieces of work are like thumbnails,” she sighs. “That’s crazy, because I want to see detail. I want to know, especially if you’re a younger designer, that you understand kerning. I want to know that you’ve used the right logo and that’s it’s not been pixelated or gone a bit funky. I don’t want to view a video that’s tiny; I want to see all the craft that’s gone into the directorship and creative direction of it.”

This principle applies to both physical and online portfolios. “I do see a lot of physical portfolios from students and brand new graduates, but most people are just turning up with iPads now,” she says. “That’s not always ideal, because sometimes it’s just too small to see the work in enough detail. So if you do bring an iPad, you should have your work printed out nicely as well, or otherwise available in a way you can view it on another screen, at large sizes.”

Design isn’t copywriting. But working to improve the words in your portfolio can still pay off hugely, says Opara. “Because that’s your life, right there. If you can generate narrative out of that, people will listen to what your process is, and you’ll become an individual persona that people start to connect with.”

If you’re going for a design job but have a different, related skill, there’s nothing wrong with showcasing it in your portfolio alongside your design projects, advises Lou Hunter, creative director at Superunion. “Whether that’s illustration, photography, film-making, printmaking, calligraphy or whatever, it’s good to show examples – as long as they’re relevant to the role and don’t dominate the portfolio.”

06. Practise talking about your work

It’s vital to talk through your portfolio well at interview, stresses Sloper. “I’ve noticed that more and more students, particularly, seem to have a lack of confidence – as opposed to a lack of talent – and that worries me. So I’d urge you to practise talking through your work; the more you do so, the better you get.”

Curation is key to a successful portfolio, says Sloper, and that involves a certain amount of restraint. “I personally don’t really care about how the portfolio is designed, provided that it’s curated well,” she says. “There’s that sweet spot, where you want between five and 10 pieces of work, perhaps a few more online.”

And the order in which you feature them is also crucial. “Because people are quite busy these days, it’s good to have your best work, the thing that just really makes you go ‘wow’, up the top,” she believes. “That’s the case whether we’re talking about a physical portfolio or online. There used to be a suggestion that you should start with your best piece of work, then have a nice variation through the middle, then end on a wow. But with reviewers being so time-poor nowadays, they often don’t get to that stage. So I’d personally advise designers just to wow me in the first few seconds.”

And that might be enough in itself to get you an interview. “I might even not look at the rest of the work,” she says. “Because I’m so fascinated by you, I might want to have a chat with you instead. In fact, with most of the best people I’ve interviewed, that’s exactly what’s happened. Over the years, you get a feeling for people who know what they’re doing, and so you can make a decision like that quite quickly.”

This is an edited version of an article originally published in issue 278 of Computer Arts, the world's leading design magazine. Buy issue 278 or subscribe here.