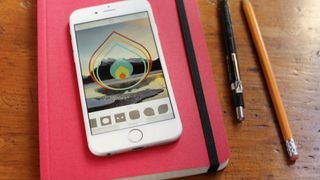 As creatives in 2016, we still do most of our work on desktop computers. But increasingly we’re looking for ways to combine that workflow with mobile apps, so we can still be creative and productive while we’re away from our studio or home office.

While iOS and Android apps were once the poor cousins of their desktop versions, nowadays they’re getting more and more powerful and versatile. So it’s definitely worth keeping an eye on the new developments.

In this post we check out the latest new mobile apps for creatives, as well as some radical upgrades to existing ones. If we’ve missed your favourites off the list, though, please don’t hesitate to let us know in the comments below.

It seems like the stuff of sci-fi, but this impressive iPad app lets you quickly transform your doodles into 3D printed models with the minimum of fuss. While most 3D printing software is forbiddingly technical, this intuitive app lets you sketch out common 3D shapes with ease, just by using your fingers on the screen.

Once you’re happy with your model, the app lets you share it with others, view it with augmented reality, send it to a 3D printer or get it 3D-printed via an online platform such as Shapeways. Gravity Sketch is free to download and you can see in action in this video.

From the people who brought you Photoshop, Adobe Lightroom is an image management and editing program for desktop that’s used throughout the whole photography process, from importing RAW files to organising and editing, right through to export and sharing online. Various mobile Lightroom apps have been available for a while now. But it was only in February that Adobe launched a version (2.0, for Android) that replicates this entire end-to-end process on your phone.

The new version boasts an in-app camera that supports the capture of images in DNG RAW format. There’s also a series of built-in presets that let you try out a range of non-destrictive looks while framing and taking your shots. Once you’ve taken your photo there are a number of powerful post-processing tools, including Split Toning, which lets you add colour casts to highlights and shadows, and Dehaze, which adds contrast and clarity to hazy or foggy scenes.

Lightroom for Android 2.0 is free to download, and unlike most Adobe apps, you don’t need a Creative Cloud subscription to use it.

Adobe Spark is a suite of three mobile apps, all integrated into one overarching web app, which enable you to create and share visual content online. Admittedly, it’s aimed at a generalist audience rather than professional designers. But it could save you a lot of messing about in Photoshop, Illustrator or After Effects when you just need to create some quick and easy content such as graphics for social media (Spark Post), online newsletters or reports (Spark Page) or animated videos that combine text and images with a voiceover (Spark Video).

Adobe Spark is free for iPhone and iPad, and you can see it in action in this video.

Swift Playgrounds is an exciting new iPad app from Apple that helps kids learn coding in a playful way. Swift is the programming language used to create software for both iOS and OS X, and the app presents you with a series of basic coding lessons to follow and challenges to pursue. It’s all very colourful, visually appealing and fun to use. Currently available as a developer beta, Swift Playgrounds will launch in public beta later this month.

We all love our Moleskines, but sometimes it’s frustrating only to have your notes, doodles and sketches available on paper. That’s why Moleskine has launched the Smart Writing Set, a physical notebook that works with the accompanying smart pen and Moleskine Notes app to transfer your scribblings into digital form, and send them to your iOS or Android phone and tablet in real time. See the app in action in this video.

Assembly is a vector design app for iPhone and iPad, and is quite simply one of the most powerful drawing apps we’ve seen on a phone. Features include smart snapping, adjust fill, stroke and shadow, and device syncing with the iCloud. It’s great for designing graphics, icons, logos, scenes and characters, and you can share your work as high-res JPEGs, PNGs and SVGs.

Assembly is free to download and you can see it in action in this video.

Moo has made a name for itself with its hip business card printing services, and is keen to target creative professionals. So now it’s released an iOS app that makes it extremely easy for photographers, illustrators and designers to create a customisable digital portfolio.

Monogram’s tile-based system lets you build up your portfolio by adding squares that include images, text, links and other content to tell your story. Your portfolio can be viewed both online and offline, so it’s a handy way to present your work to a client or interviewer when there’s no mobile internet signal available. The system is also flexible enough that it could be used for moodboards or presentations too.

Monogram is free to download and you can see it in action in this video.

Google is keen that anyone who builds apps for the Android platform makes the accessibility of their designs a high priority. That’s partly because disabled people make up a large segment of the audience, but also because making an app more accessible generally makes it easier for everyone to use.

To that end, it’s released a free Android app that helps you do just that. Accessibility Scanner lets developers test their own apps and receive suggestions on ways to enhance accessibility. For example, it might recommend enlarging small buttons or increasing the contrast between text and background more.