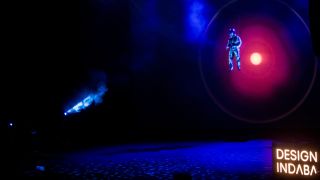 It’s been a turbulent time for Cape Town. The city started 2018 in the grip of one of the world's most dramatic urban water crises. Three consecutive years of drought mean that in the next few months Cape Town’s taps could run dry.

In an effort to delay Day Zero – the day the water runs out – the city has resorted to extreme measures. Inhabitants have a daily consumption limit of 50 litres: that’s one toilet flush (6 litres), a two-minute shower (20 litres), drinking and cooking water (10 litres) and very little else.

It was against this social and political backdrop that the 23rd annual Design Indaba opened its doors. Long an advocate of creating change through action, this year’s conference took on a new urgency: we need to translate thought, to word, to action – and we need to do it quickly.

Afrofuturist film director Sunu Gonera captured the mood immediately in his opening talk, as he urged the Indaba audience to find their voice. “Life is so fleeting,” he pointed out. “What’s your voice? What do you want to do?”

Over the following days, each of the speakers illustrated how they’ve used their creative voices to initiate change. Here are five ways they successfully took their ideas from thought to action…

One area where serious change is finally within reach is biomaterials. Fashion design graduate and Indaba speaker Aleksandra Gosiewski, who’s a co-founder of New York-based biomaterials research group AlgiKnit, entered the field after becoming disillusioned by the linear economy of fashion.

AlgiKnit’s goal, as we reported earlier, is to keep fashion products out of landfill and reduce microplastic pollution – and the team has created a sustainable alternative to manmade textiles like polyester, in the form of a rapidly renewing biodegradable yarn made from kelp.

They’ve not only made clothing from the bioyarn: they’ve also created a sneaker that rapidly degrades after the product has finished its useful lifetime. “When it’s worn out, or you don’t want it, it can be broken down by microorganism and the nutrients reclaimed to feed the next generation of product,” Gosiewski told the audience.

Architect, designer and professor at MIT Media Lab Neri Oxman also spoke about the importance of biomaterials. Her goal is to augment the relationship between built, natural and biological environments, using design principles inspired and engineered by nature, and implementing them in the invention of new design technologies.

“Nature doesn’t assemble. It grows,” she pointed out during her talk. “We’re at a point in time where there’s a clash between the world of culture and the world of nature. It’s a slow process, but they’re colliding.”

Disruption might be a trendy term – but sometimes it’s more effective to create change by bending existing ideas with gentleness and time, as specialist ophthalmologist William Mapham pointed out.

He developed the Vula app after experiencing first-hand the difficulties faced by rural health workers when they need specialist advice. Vula is a secure medical chat and referral application that connects doctors to specialists, enabling health workers – particularly those in remote rural areas – to provide patients with quick and efficient specialist care.

Since launching in 2014, 25 per cent of all cases, across all specialties, are now managed at a primary level in rural settings. Current response times are under 15 minutes, and there’s a self-learning aspect for rural health workers, too.

It’s all very well having an idea, but how do you translate it into action? One clear piece of advice to come out of Design Indaba was the need for constant iteration. It isn’t about creating finished products: it’s about continually creating working prototypes, testing them as soon as possible and feeding the results back into the next version.

BRCK UX design director Mark Kamau illustrated the concept during his talk. BRCK is an innovative technology company focused on connecting all of Africa to the internet. As he explained, there are currently three billion people in the world who are offline – with 800 million based in Africa alone.

One of the company’s products, the Kio Kit, is a hardy solution that turns any classroom into a digital classroom in minutes. During the testing phase, Kamau’s job was to go to remote schools – often without electricity or a Wi-Fi connection – and work with young children to continually improve the tablets.

Kamau said that the inspiration for the Kio Kit was to level the playing field for children in rural areas who have no access to computer labs at school, but still have to compete in national exams with better-equipped schools in urban areas.

“When you’re solving problems that don’t fundamentally affect human life, you’re scratching at fleas. But [in Africa] people are grappling with lion-sized problems,” he told the audience. “We’re going to deploy and deploy and deploy until all three billion people are connected.”

For other speakers, the concept of iteration took the form of trial and error. London-based product designer Tom Dixon, for example, talked about the importance of practicing: “The shape [of my products] is defined by a series of failures and a series of tests,” he said. “Isn’t it amazing that you can have this great idea, and turn scrap into gold in a day.”

Heavyweight designer Thomas Heatherwick highlighted the virtue of not always taking the easy route when it comes to bringing your ideas to life. He set himself the challenge of thinking by making, after realising that some buildings seem sterile because there isn’t always a “culture of making” in architecture.

“We make [the idea] because we’ll learn more from making it,” he explained. “And if you take a harder route it’s more likely to happen, sometimes, because people think it’s funny or interesting.”

Inspiring set designer Es Devlin reinforced the central message of this year’s Design Indaba – moving thought into word into action – with a stunning illustration of what can be achieved if you have big ideas in any field.

She specialises in translating voices into visual manifestations, whether that’s through putting “the face in the centre”, as with her large-scale kinetic set constructions for Beyoncé or Adele, or by translating purpose through objects, such as the giant animatronic man she designed for Take That's 2011 Progress Tour.

All the projects she talked through involved iteration – and according to Devlin, the worse her sketches get, the better the idea they express.

She also talked about the importance of practice. “The rehearsal for your life is your life,” she insisted. Devlin summed up the spirit of all the speakers – and Design Indaba itself – in her closing question. And it’s one for all creatives: “Can you translate a thought to a word to an action? And can you do that quickly, please?”