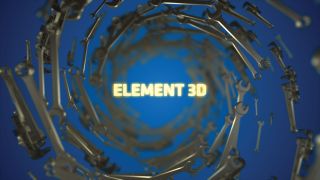 Element 3D was born as, compared to its competitors, out-of-the-box After Effects lacks true 3D capabilities. The team at Video Copilot realised that this was a feature-gap they could fill, and so created Element 3D.

Element 3D is effectively a 3D animation application within After Effects. It uses an advanced real-time render engine to make 3D objects look almost as good as if they were coming directly from a full 3D application.

With advanced features such as motion blur and depth of field and the capability to play well with other 3D-enabled After Effects plugins, artists can (and do) use Element 3D for a range of work from corporate animation to full- feature VFX.

Element 3D comes with a series of basic shapes that can be textured, sized and lit within the Element 3D interface. Then within the After Effects interface, an artist can animate and replicate these objects to their heart’s content.

The proven production development shows itself in features such as the ability to attach models to After Effects nulls. This makes animating Element 3D objects much more straightforward than just using the application’s effects palette alone. Element 3D objects can be easily animated with other After Effects 3D plugins that can make particles, allowing the creation of a jet plume from a fighter jet without the need to touch a volumetric simulation.

Element 3D can work with OBJ objects, including animated OBJ sequences that have been textured with UVs, and it also supports the basics of a PBR workflow. For Cinema 4D users, the news is even better, as Element 3D can open C4D files natively with textures attached. Let’s explore what it has to offer.

Once Element 3D has been installed, it is applied to a 2D solid object then, in the effects palette, select the Scene Setup button to open the interface. In the main Element 3D window, objects can be added and adjusted. If one of the native procedural objects is added, it can be manipulated in various ways; for example, this tube can have its inner diameter modified. Extra Element 3D native model packs can be bought from Video Copilot and other vendors.

Element 3D makes it easy to add textures to a model. Materials are dragged and dropped onto the chosen object. Element 3D classifies objects into five groups, so make sure to use the Group dropdown in the scene palette to define the model’s group assignment. Materials can be adjusted in a variety of ways; for example, glossiness can be roughened in metals. An artist’s texture maps can be added to give bespoke looks to materials and shaders.

03. Modify the model in After Effects

After Effects is well regarded for its type control. Element 3D works with text layers to allow the creation of 3D text, which can have its depth adjusted and materials applied to it as well. As with other models in Element 3D, text can be animated. Groups can be parented to Element 3D-created nulls, which allow much easier animation than using the Effects controls, making Element 3D the favourite of title designers across the world.

Element 3D works well with OBJ models with UVs applied, including OBJ sequences to allow complex 3D animations to be imported into After Effects. Cinema 4D files can be imported natively with the textures still applied. If the textures are not working to the artist’s taste in Element 3D, materials can be swapped to native shaders. Working within groups makes it easy to swap models without having to recreate complex animations.

Element 3D allows advanced features such as motion blur and depth of field to be applied in After Effects. After Effects lights also work with Element 3D, allowing a scene to be relit on the fly or as part of an animation.

Element 3D is an ideal companion for After Effects artists who want to explore what 3D can do, and 3D artists who want a quick way to integrate their models with motion graphics and VFX. You can buy Element 3D or find out more on the Video Copilot website.