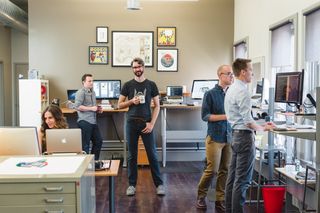 Don't miss the Bearded team at Generate New York on 27 and 28 April. Not only will they run a workshop on 'responsive web design for non-unicorns', founder Matt Griffin will also talk about what it means to be a web designer in 2017 and show additional footage that didn't make it into his documentary, What Comes Next Is The Future. Get your ticket today!

If there’s one thing Bearded is really lacking in, it’s beards. Only one of its members can be truly described as hirsute. Luckily, what it lacks in facial hair, it makes up for in design excellence. Founded in 2008 by Matt Griffin (the proud owner of the aforementioned single beard), the web design agency has been honed into a crack team of five talented individuals, each specialising in a particular field.

Working alongside Griffin are designer Matt Braun, content strategist Caralyn Green and developers Brett Bender and Patrick Fulton. We caught up with some of the team to find out the thinking behind their mission to move the web forward, and the real – slightly geeky – story behind that agency name ...

Why don’t you start off by describing Bearded, its personality and values ...

MG: We started Bearded in 2008 as just a designer and a developer. From the beginning our central idea was that of collaboration. We’ve always been single-team sized – right now those five people represent disciplines encompassing research, UX, content strategy, design and full-stack web development. No one person can be hero-level at all of the things that go into making great web experiences, so collaboration between people who each specialise in one part of the system is the key. Since we started Bearded I gave up the idea of ‘my work’. But that’s OK, because ‘our work’ is so much better than anything I’ve done on my own.

The other big thing we wanted was to do work that we could feel good about at the end of the day. Which is why you see so many non-profits on our roster. It’s not really where the big bucks are – but my feeling is that no one can pay you enough to dislike what you’re doing with your time.

Time is really all that any of us have, so you better make sure you’re having experiences you feel good about during that time. For me that means doing quality work, learning and growing as craftspeople, enjoying the interactions with each other and our clients, and making the world a little better if we can while we’re at it. Wow. That got kind of heavy, huh?

Where did the name come from?

MG: Well, I’ve had a beard for most of my years since high school, so it seemed like a safe bet. But there’s a more arcane explanation that involves type. Fair warning: aside from being a citizen of the internet, I’m also a letterpress printer. Ready? Here we go. We’re all familiar with the term ‘typeface’ right? Well, all physical type has an anatomy. The face is the surface that gets inked, the ledge the letterform emerges from is the shoulder, and the slope between the face and shoulder is the beard. It isn’t particularly noticeable, and it isn’t the part that prints. But without it there, supporting the face, you couldn’t print anything. So that’s my long and rarified metaphor for Bearded. It doesn’t make  a very good elevator pitch.

How did the agency start?

MG: Two guys in our homes making sites and a logo for next to nothing. Not long into it we got a leaky office and a third dev. It was humble beginnings for sure. We really had no idea what we were doing with pretty much anything, which was kind of an asset. If we’d known how ignorant we were about running a business I may have never recovered from the resulting panic attack.

PF: In short: awesome! The community here is close-knit, vibrant and excited about the web. There are so many web and tech-related meetups here that one could attend a different event on nearly any weeknight. Pittsburgh itself is great, too. Many people think of it as an American football-crazed, dirty, smoky steel town – but that’s not really the case any more. We still love our sports teams, but the city and surrounding region are beautiful.

You say: “We do more than incorporate future-friendly technologies – we help move the web forward.” Can you give us some examples?

MG: Everything we come up with that seems remotely useful we write about, speak about or put on GitHub for people to use. Which to me is just what one should do on the web. We’ve all received so much great free knowledge from everyone before us, as well as our contemporaries – anything we can do to give back will only be a drop in the bucket, compared to what we’ve already received. We’re just trying to balance the scales a little.

What’s the key to a successful agency-client relationship?

MG: Honesty. That’s the big one. If something’s bugging you, don’t bottle it up and make assumptions about the client’s intent. Tell them about it. They’re on your team, after all! They want the same thing you do – a startlingly successful project.  A smart friend of mine, Norm Goldberg, who works at another Pittsburgh agency, said a client once told him there were only two things they wanted from him: “Don’t surprise me, and don’t make me cry.” Even good surprises aren’t a good thing, because they mean the client’s out of the loop. That’s pretty good advice. Bring them into the team so they’ll never be surprised. Because they’re embedded in the process. There will likely be less crying that way. Hey, this is pretty good marriage advice, too. Do you guys have a magazine for that?

How do you run your initial meetings with a client?

MG: That’s a whole article right there! Not long ago we brought Seven Heads Design’s Kevin M Hoffman in on a project, and he really workshopped us on kick-offs. It’s totally changed the way we work. Before our first meeting we do a series of stakeholder and user interviews to get the lay of the land. Then we design a custom one- or two-day workshop to explore those themes through various collaborative activities. It’s probably currently the most fun and exhausting part of my job.

How do you ensure you and your client are on the same page before the pixel-pushing begins?

MB: Over the last year we’ve really refined our research and discovery phase. It’s important to know what problems you’re trying to solve before you start trying to solve them. So before we get into design we ask a lot of questions. This includes the interviews and the kick-off workshop, and a lot of IA, UX and content strategy work where we get to know the client, and why we’re making what we’re making.

We explore who the client is, who it’s not, and who it wants to be. We also attempt to define who the users are, what their stories are, and how they’ll find a use for what we’re making. With this we can define the overall direction, and potential hurdles become more evident.

Do clients sometimes find it hard to understand your creative direction?

MB: Occasionally – but for the most part, no. We never have a ‘big reveal’ on our projects. Clients are able to view their site’s wireframes and mockups in a browser, so they’re exposed to ‘real’ stuff very early in the process. Our clients are our partners, and we’ve found it works best to keep the process transparent and let them in on things early. If we have an off-the-wall idea, we might do a quick mockup or sketch and just show it to them early. But more often than not, it’s an idea that might have already been discovered together in our kick-off meetings or presented in the research phase, so they’re expecting it.

Are all your sites built from scratch or do you have a menu of elements and components that you draw together?

PF: We begin building our sites with the help of Stubble, our starter kit. Stubble is a simple collection of our most commonly used patterns –  it’s Bearded’s boilerplate. Stubble helps us quickly put together our wireframes, and make a consistent and clear start on our mockups.

net: Tell us about your What Comes Next is the Future project ...

MG: Well, we’ve made a movie. It’s a documentary about the people who build the web, which gave me an excuse to nerd out with people whose work and ideas I very much admire.

You can watch it for free now:

See Bearded live in NYC in April, where they will be giving their hands-on workshop Responsive Web Design for Non-Unicorns, helping teams learn how to work together better on complex RWD projects.

This articles was originally published in net magazine issue 260 (November 2014).