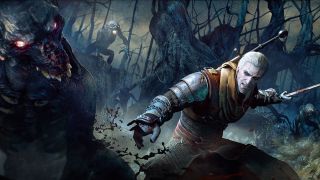 CD Projekt Red is responsible for The Witcher art, the jaw-dropping graphic design for a series of fantasy role-playing games brought to life from the novel series The Witcher, by Andrzej Sapkowski. The Witcher is big news at the moment as fans are eagerly awaiting its TV adaptation, tipped to hit Netflix in 2020, and we can't wait to see how the mind-blowing art is recreated for the small screen.

The Witcher art is a dark, fantasy themed masterpiece, but CD Projekt Red certainly aren't sticking to what they know for their next project. The Warsaw-based studio are diving into unchartered territory with the sci-fi feel of their new project. Cyberpunk 2077 is an open-world role-playing game based on the Cyberpunk 2020 tabletop role playing game system (due for release next year) and it couldn't be more different. While art for The Witcher is dramatic and thundery, the art for Cyberpunk 2077 is intensely futuristic: bright and full of colour.

We've gone behind the scenes at CD Projekt Red to find out more about their design process for The Witcher, and how they've managed the transition to new territory. If you feel inspired by their creativity and want to hone your own skills, why not take a look at our character design tips or our pick of the best illustrator tutorials?

The creative activity at CD Projekt Red whilst making the Cyberpunk 2077 and The Witcher art means a wide variety of artists are needed, says character art director Paweł Mielniczuk. "Our artists’ specialities range from concept design, to organic and hard surface modelling, to level design, to cinematic and gameplay animation, to promo and DTP art," he says.

"Characters are mostly painted and photobashed, weapon design mixes 2D and 3D art, while vehicles are designed entirely in 3D from the very beginning," explains Mielniczuk. "Designs are then forwarded to character, weapon or vehicle artists to be further defined and polished during modelling stages."

Artists at CD Projekt Red work across a range of visual styles, but one common characteristic is a strong focus on colour. "In both The Witcher’s dark fantasy setting and the dystopian world of Cyberpunk 2077, we believe the spectrum of colours should be just as wide as our characters’ spectrum of grey morality," says Mielniczuk.

The studio also takes pains to get the look of its characters right. "Until we create a character that we truly love, we keep working on them," he stresses. "When it comes to character designs, we never have deadlines."

While many of CD Projekt Red’s artists have been around for a long time, they can’t rest on their laurels – particularly at the moment. "The transition from making games in the Witcher universe to Cyberpunk 2077 has been one of the biggest challenges I as a producer and we as a studio have faced," explains lead content producer Michał Stec.

"Changing the setting from medieval dark fantasy to futuristic sci-fi, shifting perspective from third-person to first-person, giving players the ability to shape their own character rather than using an already defined one… in many ways, this has required us to rethink our approach toward making games."

One thing that helps the studio meet these challenges is its democratic approach to ideas-sharing, Stec adds. "It doesn’t matter how long you’ve been at the studio or what position you hold – if you have an idea and want to share it, you can, and people will listen," he says. "And if the idea is really good, it may very well end up in the game and make it better."

Illustrator/illustration coordinator Bogna Gawronska describes the atmosphere at the studio as: "Friendly, constantly motivating, with a pinch of creative chaos and a huge dose of fun. The studio is made up of talented, hardworking people and I think you can feel it being here."

"It was a challenge and a real blast to be able to work on both projects, as both a card illustrator, and one of the artists creating the redesigned look of the board for Gwent," she says. “It was really cool to see my work and the work of my colleagues come together in such a short amount of time – from prototypes and concepts, to animated, almost living environments featuring fully 3D characters."

Gawronska uses a Wacom tablet with Photoshop for painting, and an iPad with Procreate for sketching. "I also do some 3D work; when I do, it’s mostly Blender, but not exclusively."

But whatever project she works on, her biggest sense of satisfaction comes from feedback from the public. "I have one of these proud moments every time I read one of the fan letters people send us," she says. "We often laugh that as artists and game developers we should chill – it’s not like we’re saving lives or anything. But whenever I see that the games we create positively affect the lives of the people who play them, I feel a huge privilege to be one of the people that make them."

And she’d love you to join them. “If you like what we do, make sure to follow our website for new job openings,” Gawronska says. “We’re always on the lookout for talented and friendly individuals who share our passion for games. And even if you feel like you’re not there yet, don’t give up. Starting as an intern might just be the thing that will push your art career forward big time.”

This article was originally published in issue 169 of ImagineFX, the world's best-selling magazine for digital artists. Buy issue 169 or subscribe to ImagineFX.