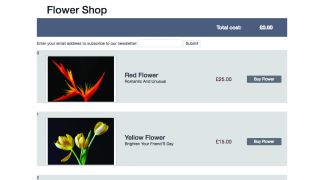 In March, the Angular team released version 4, and with it some exciting new features to explore. In this tutorial we’ll show you how to make an app using some of these new features, as well as demonstrating some of the powerful performance-enhancing, under- the-hood changes.

The Angular team is calling it an ‘invisible makeover’, because most of the changes are in the background rather than with core coding functionality. An important change is the move to ahead-of-time compilation as standard, which has the potential to drastically improve performance when used correctly. TypeScript 2.1+ is also now supported, which gives us access to all the new features of ES2015.

That’s not to say there aren’t also any notable changes to the basics – for example, there's a useful new template-binding syntax that enables us to simplify our code by adding an else option to ngIf, and the ability to assign local variables within an ngFor.

Angular 4 is the first major version release of the framework adopted of semantic versioning. So don’t worry, you didn’t miss 3.0 – there were two major updates, and both were rolled into version 4.0.

Note also that Angular 1.x is now known as AngularJS, and Angular 2+ is simply referred to as Angular. Be wary as some third-party tutorials and libraries may not have updated their use of these terms.

Get the tutorial files

Let's starting from scratch, and use the Angular CLI to build a Hello World app. If you want to update an existing app, skip to step 4. If you haven’t already, download Node, which comes pre-packaged with npm. If you already have Node, check it's at least Node 6.9.x and npm 3.x.x from the command line.

Now we have a package manager we can use it to install Angular and the Angular CLI. Amongst other things, the CLI enables you to easily generate new projects and components.

If you’ve not seen an Angular project before, take time to familiarise yourself with the file structure generated by the CLI. For our new project, our package.json should list version 4.0.0 Angular packages.

If you have an existing Angular app with 2.x versions listed, it’s really easy to update to version 4 in most cases. We just need to install and update the relevant packages from the command line. Mac:

From now on we’ll be working with an Angular 2 example app that you can download from FileSilo (for full notes on how to do this, see intro above). Note that this app has been created purely for illustrative purposes. Once you’ve downloaded theFlower Shop app into your root directory, install dependencies and launch in the browser.

Within the flower-shop directory, upgrade to 4.0. We have some UNMET PEER DEPENDENCY errors after upgrading.

Peer dependencies are for managing projects that have packages relying on different versions of the same dependencies. You have to add these manually to your package.json file. The peer dependencies that we need for Flower Shop include older versions of @angular/{core,http}, rxjs and zone.js.

Review the errors in the terminal output and add each missing dependency to package.json.

08. Watch out for name changes

Our Flower Shop app makes use of an open-source custom component called ng2-modal. However, the author has since updated their naming convention to ngx-modal. We need to modify our dependency name and ng-module imports accordingly.

Our custom modal component also needs updating to a more recent version, so be sure to update it with npm.

Now  we’ve patched up our dependencies, it’s a good idea to clear node_modules and build it again from our package.json. If all goes well you should have a clean build! If you don’t, something may still be missing in your dependency versions. Take another look.