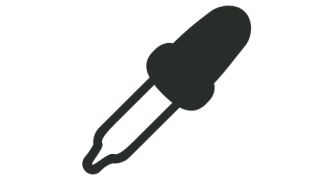 Ever used a tool day-in, day-out, but only recently discovered its full potential? That's exactly what happened to artist Jane Ng, who found out that you can use Photoshop's eyedropper tool to pick colours outside of Photoshop CC itself.

In what might be one of the most succinct Photoshop tutorials we've ever seen, Ng was shown how to use the eyedropper tool via Twitter. After tweeting her frustration at being unable to pick colours beyond Photoshop into the void of social media, she was amazed to hear from designer Timothy Kempf that you can actually do just that! His revelatory tweet read:

"You have to *start* the color selection within PS, but it can *end* wherever you're able to move your mouse to."

The news prompted Ng and other Photoshop users to freak out. New colour picking possibilities were now available to them, and all it took was a single tweet to be shown the way.

if only Photoshop's eyedropper tool lets me pick colors outside of Photoshop like this ref I have in a browserMarch 24, 2017

@takempf @thatJaneNg yeah this! I only recently discovered this by accident, completely blew my mind.March 24, 2017