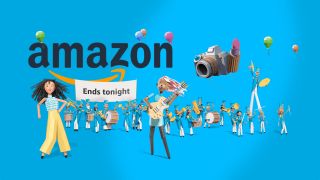 Amazon Prime Day 2020 is the next annual sales event from the retail giant. Normally taking place in July, the first Prime Day was in 2015 as a way to celebrate Amazon's 20th birthday.

Prime Day 2019 was a little misleading last year, with the epic event running across not one but two days on the 15 and 16 July. It was the longest Amazon Prime Day(s) to date, and, having scoured Amazon to bring you the best Prime Day deals, saw some incredible offers.

This year is different. So far the coronavirus crisis has filled 2020 with uncertainty, and the Amazon Prime Day date has been unclear. If recent intel is to be believed though, it seems the flagship sale may be taking place in early October (though we have also been led to believe that it could have happened in September – that now doesn't look likely). For more information, see the when is Amazon Prime Day 2020 section.

But if you're after a great deal, you don't have to wait. The Amazon Summer Sale is now in full swing, and there are some brilliant savings to be had right now across a range of items.

Use the links below to head straight to the items of most interest on Amazon, or scroll further down to see a more detailed round up of the deals we expect to see surface on Amazon Prime Day 2020, plus some amazing deals already on.

If you're looking to buy a new laptop, it's well worth waiting to see what Amazon Prime Day offers. Last year we saw a number of huge savings on popular devices for creatives, including the MacBook Pro, Surface Laptop, Lenovo and Dell devices. Granted it was on older devices, but all of which are still highly capable laptops in their own right. If you're not bothered about the most recent model, Amazon Prime Day is a great time to pick up an amazing bargain on still seriously powerful devices.

If you can't wait for Amazon Prime Day to come around before you buy, here are some of the best laptop models for artists and designers, at the lowest prices.

There are a number of powerful tablets on the market, many of which saw incredible discounts last Amazon Prime Day. There were huge savings to be had on Apple's iPad and iPad Pro and Microsoft's Surface Pro 6 and 7, in particular. With both companies releasing brand new products this year, we expect to see even more impressive reductions on some of their older, but still very capable, devices. So if you're in no immediate hurry, it's worth holding on to see what Amazon Prime Day has in store this year for these powerful tablets.

If you need a new tablet now, there are some great offers available:

Amazon Prime Day is always a great time to grab a bargain on a new TV. Last year, saw popular brands including LG, Samsung and Sony drop their prices by a huge amount, with one of the best deals being a 55-inch, 4K Smart LG TV for less than £450. This year we expect to see similar, if not better deals, with incredible reductions on everything from 55-inch to 75-inch TVs. So no matter what size or style you're after, you're sure to find amazing savings this Prime Day.

Prime Day 2019 was a brilliant year for Copic Marker deals, with huge savings across a range of sets. And you won't be surprised to hear they flew off the shelves. One of the best offers we saw was on a 36-piece Copic Marker set, which was reduced by over £80! This super popular art tool is a best seller all year round, but if you can hold off buying any for a little longer, it could well be worth it when Amazon Prime Day arrives. Here's hoping we see even better savings this year.

If you're quick, you can grab one of these amazing Copic Marker set deals aready running. Hurry, these are only available while stocks last, and at these prices, we don't expect them to hang around for long.

Like with any event right now, predicting when or even if it will happen is not an exact science. If Amazon Prime Day 2020 was to follow the event's regular pattern, our money would have been on it starting on Monday 13 July and end at midnight on Tuesday 14 July 2020. But this is not a regular year, and we don't like losing money!

But there have been some more whispers regarding the actual date, with an email reportedly sent to third-party sellers pushing the event back from September to early October. Apparently, the week of the 5 October has been marked as a "placeholder date", but since Amazon's response emphasised that there hasn't been an official announcement, this isn't definite yet.

Since there's been no official word from Amazon either way, this is still just speculation at this point, and the event could still be cancelled (though we highly doubt it – even business behemoths like Amazon need to earn a crust).

What will be the best deals on Amazon Prime Day 2020?

An April article by Reuters reported that the decision to delay Amazon Prime Day 2020 would mean the company has a huge backlog of extra devices (approx 5 million), and so if the event does go ahead, we expect to see the absolute biggest discounts across the Amazon device board that we've yet seen.

Last year saw a number of incredible deals for artists and designers across a range of categories, but the most popular were hardware (including a certain fruit-themed company), creative software and art supplies. We think this will be the same for 2020, with even better discounts.

What can we expect from Amazon Prime Day 2020?

If Amazon Prime Day 2020 does go ahead, we expect it to be unlike any other so far. Amazon will almost certainly push its own products and Alexa-compatible products, but depending on how ongoing Covid-19 crisis is affecting the world at the time it goes live may well inform where we see the best offers.

In general we’d expect to see some good deals on home office equipment, garden furniture, outgoing console generation, on Windows laptops – especially high-spec ones – and on peripherals, plus the usual selection of kitchen gadgets and bits and pieces. And for creatives, we’d expect very similar deals to the ones we’ve detailed above, including even more deals on various iPad and Microsoft Surface models.