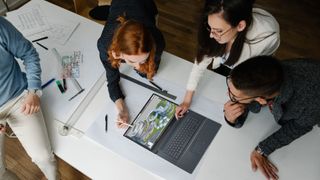 Asus has announced a new 15-inch workstation-class laptop for content-creation professionals at CES 2019 – and it looks exciting.

The Asus StudioBook S (W700) squeezes Intel Xeon processors, Nvidia Quadro P3200 graphics, up to 64GB of RAM, 4TB of SSD storage and a 17-inch Full HD display into a sleek 15-inch chassis. That’s thanks to 5.3mm bezels, and a 97 per cent screen-to-body ratio.

The display has a 16:10 aspect ratio, with a 178-degree wide-view panel and anti-glare. Asus claims it offers 97 per cent DCI-P3 colour gamut coverage and Delta E<2 colour accuracy, all of which will appeal to 4K video and film editors, CAD designers and creatives generally. Plus it’s Pantone Validated to ensure the colours seen on the screen are accurate.

The Asus StudioBook S is also fairly light at 5.27pounds / 2.39kg. It’s slim, too, at just 0.72inches / 18.29mm thick. The idea is that you can take this new breed of workstation with you, so you can work anywhere. It’s small enough to be stored in a carry-on, but – says Asus – it offers military grade durability.

One feature we particularly like is the trackpad, which has a built-in number pad for when you need it.

Connectivity options include dual-band Wi-Fi 6 and Bluetooth 5.0, and the Asus StudioBook S comes with the following ports: a USB-C port with Thunderbolt 3, three USB-A 3.1 ports, an HDMI 2.0 port, an SD card reader and headphone jack.

There’s no definite word on pricing and availability yet. All we know is that this information will be provided in the "coming months". But it’s safe to say this sleek portable workstation won’t come cheap.