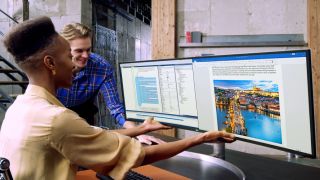 Update: we're now just a few hours away from LG's press conferences at CES 2019, here in Vegas. Full news to follow as soon as it's announced.

LG will be showcasing two new ‘ultra’ monitors at CES 2019 in January. That’s according to a press release from the company in December, which announced a new 49-inch display for business professionals and a 38-inch display for gamers and creatives.

The new 49-inch LG UltraWide Monitor (model 49WL95) will sport a 32:9 aspect ratio screen – that’s the equivalent of two 16:9 screens – and a 5120 x 1440 resolution with 108 pixels per inch. It’s been designed to boost productivity by making it easier to multitask, and is aimed primarily at people working in finance, IT, digital design and architecture.

LG says it’ll also have a 144Hz refresh rate, response time of 2m/s – great news for gamers and video editors – and LG's Sphere Lighting technology. The latter displays ambient light from the back of the monitor to reduce eye fatigue.

"With a wide choice of models that prioritize productivity, picture quality and out-of-this-world gaming, more and more consumers are seeing LG as a innovation leader in monitors,” said Jang Ik-hwan, head of LG's IT division of the Home Entertainment Company.

We’ll be reporting live from CES 2019, so tune in from Monday 7 Jan 2019 for all the latest news for creatives from the world’s biggest tech show.