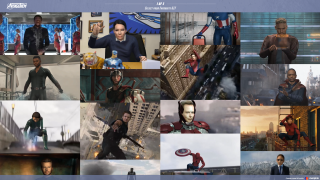 If you could have a super power, what would it be? This is a question we've all considered at one time or another (the right answer is flying, by the way), but thanks to an unofficial photo app you can now get a step closer to being a superhero from the Avengers films.

Launched in time to coincide with the latest instalment of Marvel's epic cinematic franchise, Avengers: Endgame, the Avenge Them site takes a photo of your face and places it over a GIF of footage from the blockbuster movies.

At the time of writing there are 18 GIFS available for you to interact with. So if you've ever seen yourself as a bit of a Tony Stark, or perhaps you want to punch through the roof of a train like Captain Marvel, now's your chance to see how you'd look in the starring role.

Here's how I'd look as Star-Lord from Guardians of the Galaxy to give you an idea of how it works...

The site uses CGI technology from the Morphin app to put you in the shoes of Spider-Man and the like. After it's converted your face into a 3D model, you'll see yourself carrying out heroic feats of derring-do. What's more, you can download the GIFs once they're processed.

Considering that Morphin is a fresh app on the scene, the results aren't the most polished of special effects. Marvel has set a high bench mark with its films when it comes to visual spectacle, but there's plenty of uncanny valley fun to be had watching a strangely rendered version of your face getting ready to go head to head with Thanos.