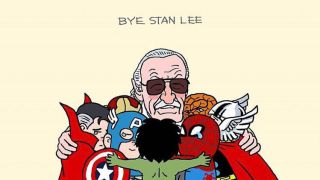 By now we're sure you've heard the news that the legendary Stan Lee has passed away at the age of 95. The Marvel editor-in-chief, writer and publisher was the co-creator of several of the biggest comic characters, including Spider-Man, X-Men and Fantastic Four to name but a few. In light of the news, artists have taken to social media to share their thoughts of the great man via art, stories and web comics.

With his warm personality and sheer enthusiasm for comics, Lee became one of the most admired and respected names in the industry. His cameo appearances in the Marvel films were a highlight of each release, and his importance in the history of comics cannot be overstated.

Lee's passing leaves a huge hole at the heart of the world of comics. With the man and his creations having touched the lives of millions, it comes as no surprise that social media has been overflowing with tributes.

Using the hashtags #StanLee, #StanLeeRIP and #StanLeeForever, Twitter has been flooded with artwork as users pay their respects. Actors, writers and editors have also lined up to remember Lee and his monumental impact – here are some of the messages that tugged at our heart-strings.

As the man himself was famous for saying: 'excelsior!'

Thank you #StanLee for the many gifts you shared with us all. Your storytelling, your characters and your creative genius. We’re honoured to have played a part in bringing some of your life’s work to the big screen. pic.twitter.com/3lYMa40h37November 13, 2018

An odd thing about origin story superhero films is that in these parallel universes we must assume these people inhabit worlds where the amazing creations of Stan Lee (and others) don’t already exist. Frankly that’s impossible to imagine. #StanLee we can never thank you enough. pic.twitter.com/IfkRqgOwtgNovember 12, 2018

Thank you Stan Lee . Your art made an impact on my life . RIP Mr.Lee pic.twitter.com/yZdo4tOoU8November 12, 2018

We'll miss you dearly, Stan! Sending you and Joan a big kiss and my farewell.#StanLee #RIPStantheMan pic.twitter.com/j4TXGYiNE6November 12, 2018

Stan Lee could never understand my Scots accent. Years later, I introduced myself as the artist on Omega for the Excelsior line and great to finally meet him. He shook my hand, huge smile, said “I can tell by your accent, you’re from Brooklyn! Excelsior”and off he went! PerfectNovember 13, 2018

#StanLee by Jun Chiu Illustration. Maybe we will forget many heroes, but we will always remember the man who created the heroes. pic.twitter.com/WgfZMJAlzeNovember 13, 2018

One of the first things I remember drawing was Spiderman. RIP Stan Lee #StanLeeForever #StanLee pic.twitter.com/aDKVnUhvG3November 13, 2018

With so many people sharing the artistic tributes, it can be hard to know where they came from. If you know the source of any of these amazing illustrations, please let us know.