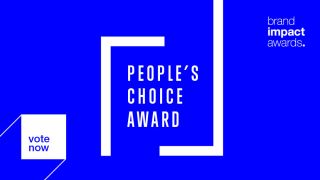 It's that exciting time of year again where designers around the globe get set for the annual Brand Impact Awards. Brought to you by Computer Arts and Creative Bloq, this international awards scheme celebrates the very best in branding design – and this year's shortlist features 47 incredible projects, painstakingly chosen from a record 194 entries by our world-class judging panel.

Don't agree with their decisions? For the first time ever, we're giving you the chance to have your say. To mark the fifth year of the BIAs – and acknowledge the growing role that social media plays in the branding scene, for better or worse – we are delighted to announce a special new prize for 2018: the People's Choice Award.

Uniquely, the shortlist for the People's Choice Award isn't decided by a judging panel, or by agency submission: quite simply, these are the projects that have generated the most interest and discussion over the past 12 months on Creative Bloq. And as the name implies, the winner is also decided by you – the design community.

Nine nominees will go to head-to-head for the chance to collect this special award at this year's BIA ceremony – representing the acclaim of the design community at large. The project with the most votes is the winner, so cast your vote wisely!

Below are details of the nine branding projects that received the most traffic – and social media discussion – on Creative Bloq this year. It's up to you to make your vote count, and decide the best project in your opinion. Once you've voted, share your decision via Facebook, Twitter or Instagram, and convince your peers to vote too.

Voting is open now, and will close on 30 July. The winner of the People's Choice Award will be announced and presented at the Brand Impact Award 2018 ceremony on 6 September 2018, at the trendy Ham Yard Hotel in London's Soho.

Below are the nominees, in no particular order. Now it's up to you to decide the winner...

Just a few weeks ago, renowned advertising agency Ogilvy launched a rebrand, created in partnership with Collins. The rebrand included a new visual system covering Ogilvy's website, font, and logo design. But the most notable difference was the drop of the word Mather to the more straightforward (though no easier to spell) Ogilvy.

The rebrand took two years to complete, part of which was tweaking Ogilvy's wordmark's typeface to make it weightier and more in line with a previous handwritten logo based on founder David Ogilvy's signature. "Like our strategic work, the visual identity system has its roots in Ogilvy history," the Collins team explain.

The recent IHOp rebrand was a great lesson in how you don't need a big budget to successfully bring together a product and branding, and generate a whole lot of attention in the process. The breakfast food chain announced it was flipping the lettering in its logo design, going from IHOP to IHOb, which lead to lots of speculation as to what the mystery 'b' might stand for.

As it happens, the 'b' stands for 'burgers', tying into a new line of Ultimate Steakburgers launched by the chain. Very simple, but very effective.

Pentagram partners Marina Willer and Naresh Ramchandani, wowed the design world earlier this year with this charming rebrand for Battersea, a much-loved British charity that cares for cats and dogs across the UK.

The refresh also includes a new logo design, made up of a family of hand-drawn, abstract watercolour images by Japanese illustrator Hiromi Suzuki, designed to emphasise the charity's commitment to every animal in its care.

Another entry from Pentagram, this time from partner Abbott Miller, who led AMEX's first identity refresh in 37 years. The refresh comes as part of the company's new global marketing campaign, called 'Powerful Backing: Don’t Do Business / Don’t Live Life Without It', which focuses on how deeply intertwined personal and work life can be, and the role that AMEX can play in supporting that.

Most notably was the focus on the company's instantly recognisable little blue symbol, the aim being to preserve – but enhance – its design.

Fans and designers alike were amazed when Formula 1 unveiled its first rebrand for 23 years at the end of 2017. The new sleek red logo replaced the familiar Carter Wong studio negative space logo, which the infamous single seater auto racing event had used since 1994.

The new identity was created by a team at Wieden + Kennedy London led by Richard Turley. Formula 1's director of marketing, Ellie Norman, says that the refresh “speaks to the core of why people loved the sport in the first place."

The first visual identity for the Houses of Parliament was unveiled in March this year. Created in collaboration between the House of Commons and the House of Lords with brand and digital design studio SomeOne, the new identity aims to make UK Parliament (as it's now referred to as a brand) fit for purpose on digital platforms.

As part of the identity, SomeOne created a wordmark, typefaces, website guidelines, icon suites, digital guidelines and responsive templates.

November last year saw crowdfunding site Kickstarter roll out a surprise rebrand that flies in the face of recent design overhauls. Whereas the likes of Dropbox and eBay have reinvented themselves with vibrant colour palettes in an attempt to grab attention, Kickstarter has done the opposite and launched a bloated, single colour logo, and a pared-back website design.

Created in partnership between Kickstarter's in-house design team and New York-based design office Order, the new identity is centred around a puffed up wordmark that does away with the black and green colours from the old logo.

Back in the summer of 2016, branding agency North was commissioned to develop a new visual language for the Science Museum, which was unveiled in October last year.  The first visual shake-up for the London tourist attraction in seven years, it caused a bit of a stir initially, most notably from the agency behind the old branding scheme, Johnson Banks.

However, like with many rebrands, the dust quickly settled, with many people taking to social media to applaud the new design, the main feature of which was new customised SMG Sans, which North worked closely with type foundry Fontseek to create.

Cast your vote for the People's Choice Award!

You've seen all the entries, now it's time for you to be the judge.
Click here to cast your vote!