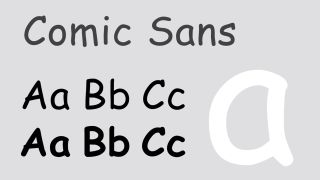 If there's one thing artists, designers and typographers alike seem to agree on, it's that Comic Sans should never be seen (at least outside of a primary school classroom). But recent events online have led to an unexpected show of solidarity with the poor, potentially misunderstood typeface.

While it probably won't be entering our best free fonts list any time soon, it seems Comic Sans has more supporters (fans, even?) than any of us realised. It all started when the official Twitter account for BBC quiz show QI revealed that the cartoonish typeface is in fact the UK's second most trusted font, after good old Times New Roman:

While we don't know where the data comes from (but then who are we to question QI?), many Twitter users were quick to respond with exactly the kind of vitriol you'd expect to be reserved for a slightly cartoonish font. "Ok 2020 can stop taking the piss now," one user replied, while another added, "No it isn't. Who wrote this? You're fired". Unexpectedly though, several users came rushing to the defence of Comic Sans, citing its accessibility benefits – particularly for those with dyslexia or ADHD:

Before you post your Comic Sans snark, stop to think about the fact it is the most legible for people with ADHD, dyslexia, or literacy issues. I used to write client letters in this font if they told me that they had neurodiversity issues. Please can we all rein in the snobbery? https://t.co/GPeBT6ymU2June 22, 2020

Ah, comic sans. Used to think it the scuzziest typeface on the planet. Then I was told that it helps productivity in people with ADHD/on the spectrum. Tried it. I can confirm it works. Have written nearly 35,000 words in the last month. #comicsans pic.twitter.com/XTpowIgoISJune 22, 2020

I've worked in social care for over ten years. First with elderly, then people with dementia and now adults with learning disabilities. Comic sans is easily the best font to use for people that I've worked with to read. I don't really understand the snobbery towards it.June 22, 2020

WOW!!I am guilty of taking the piss out of Comic Sans... oops!I apologise, I had absolutely NO IDEA about the fact it is the most legible font for people with ADHD, dyslexia, or literacy issues.That's AMAZING and I will never speak ill of it again!June 22, 2020

But it seems the biggest fan of Comic Sans is its creator, Vincent Connare – who called it "the greatest font in the world". Connare created Comic Sans in 1993, when he needed a typeface for a talking cartoon dog application called Microsoft Bob.

So there we have it – Comic Sans might not be quite as bad as it seems. Next time we're feeling snarky about it, we'd do well to remember the serious accessibility benefits behind the less-than-serious typeface.

And while it isn't the most, er, professional-looking typeface around, not everything needs to look like a financial report  – we've got plenty of fun fonts to liven up your design projects (or financial reports, if you like).