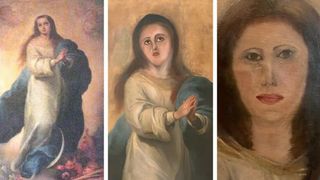 Everyone remembers where they were when they first saw 2012's famous 'Monkey Jesus' restoration, and it seems we have another less-than-perfect clean-up job on our hands. This time it's The Immaculate Conception by Bartolomé Esteban Murillo, which has suffered not one, but two failed restoration attempts.

A Valencia-based art collector paid apparently €1,200 to have the painting cleared up by a furniture restorer, but after two unsuccessful attempts, the painting was left unrecognisable (said furniture restorer might want to take a look at our guide to painting techniques). According to Spain's Europa Press, the collector is seeking to have the piece restored a third time – this time by someone with training.

The original is on the left. The two attempts at "restoring" it are on the right. Ouch."Experts call for regulation after latest botched art restoration in Spain: Immaculate Conception painting by Murillo reportedly cleaned by furniture restorer."https://t.co/t3kAIZYnNS pic.twitter.com/m8Kabrt7QuJune 22, 2020

Not only do neither of the restoration attempts resemble the original, but they also look nothing like one another (although both are terrifying). Somehow, we've ended up looking at three completely different paintings – not exactly how restorations are supposed to work.

While the botched restoration has led to amusement online, Spain's Professional Association of Restorers and Conservators isn't laughing. It claims that the case highlights the "lack of legal protections" for art (anyone can legally restore an artwork, regardless of their experience), and calls this latest attempt "an act of vandalism".

Elsewhere, the UK's Royal Academy of Arts has invited budding artists to attempt their own restoration of the painting on Twitter. The results are about as serious as you might expect:

Even successful restorations can lead to unexpected results. This January, it was discovered that 15th Century painting The Ghent Altarpiece had been painted over in the 16th Century. When the re-painting was stripped away, the lamb in the centre was revealed to feature a strange, sassy face. While our furniture restorer could have tried the excuse that the strange face was there all along, perhaps it's best if they stick to the desk job.