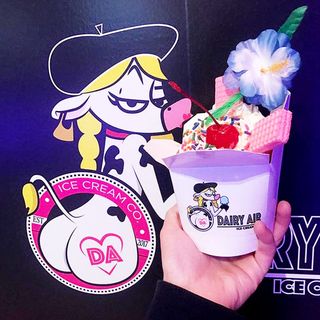 A new ice cream shop in Montclair, New Jersey, has sparked a beef with local residents thanks to its sexualised cow logo design.

The controversial logo (above) features a coquettish cartoon cow with blonde braids and a saucy beret tucking into an ice-cream. However it's the cow's unmissable augmented ass that has caused offence among townspeople.

This might seem like a moment of marketing madness, but the logo starts to make more sense when you learn that the shop is called Dairy Air Ice Cream. Not that this justifies that design, but at least you can trace the shop's thought process – although it does make us wonder if the owners came up the pun first, then tried to build an entire business plan around it.

What's particularly disturbing about the logo is that the rear end appears to be humanised. While that old advertising adage of 'sex sells' probably isn't going anywhere any time soon, surely this raunchy reverse cow centaur has crossed a line?

The internet certainly seems to think so. Fellow local business owner Amy Tingle took to Facebook to express her outrage in a now-private open letter to Dairy Air Ice Cream.

“It is offensive and sickening," she writes. "A hyper-sexualized, obviously female cow with her ass upended and poking through a circle, tail raised up, waiting for what? I’m not sure, but I do know that I am repulsed and offended. This kind of marketing scheme is the reason we currently have an [alleged] sexual predator in the White House.”

Strangely, the exterior of Dairy Air Ice Cream features a different logo – one that doesn't hint at the debauchery within. Instead it opts for a tasteful and entirely un-suggestive ice cream sandwich.

Ice cream shops are traditionally family friendly establishments. So luring customers in with what looks like an ordinary logo, only to surprise them with curvaceous cattle once they're through the door, merely serves to compound the issue.

This isn't the only instance of logo designers sexualising cows. Nestlé's range of low fat ice creams, Skinny Cow, uses a logo of a slender cow draped over the brand name and wrapped in a tape measure. Complete with eyelashes and lipstick applied – with amazing precision, considering she has hooves instead of hands – the Skinny Cow mascot looks like she's about to ask you to draw her like one of your French girls.

The seduction continues when you get to the Skinny Cow product overview: "Creamy deliciousness comes in a host of Skinny forms, from luscious sandwiches and cones to decadent ice cream candy bars and truffle bars. You’ll find happiness in every bite." Blimey. We dread to think what the Dairy Air Ice Cream mission statement promises.

At the prudish end of the flirtatious cow logo spectrum is Bel's Laughing Cow. This bubbly bovine features only the mildest of feminine eyelashes, although she does wear earrings of creamy cheese so there's probably more going on with this one than meets the eye. And the less said about her provocative red colour scheme the better.

As for Dairy Air Ice Cream, it's gone the way of other brands that have been publicly shamed. It's shut down its social media platforms and issued an apology.

The shop's manager, Natalie DeRose, said in a statement issued on Facebook: "We have heard the complaints. We take them very seriously and we are acting to change the cow to be more fun and less sexy. Our goal was always fun and not sexy.”

Dairy Air Ice Cream will also be open for community meetings for residents who want to discuss the logo further.