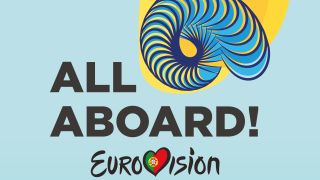 This doesn't mean Eurovision has thrown the idea of diversity completely out of the window. Instead it's used the ocean as a creative theme that acts as a framework for a similar angle, summed up with the zingy slogan "All Aboard!" The nautical theme also ties in nicely to the history of Lisbon, Portugal, which is where the 63rd contest will be hosted.

Watch how the new logo came about and get hyped for the 2018 contest with the video below.

Organised by the European Broadcasting Union (EBU) with its Portuguese Member RTP, the 2018 logos use the ocean to explore how the continent is connected.

Gonçalo Madaíl, creative manager of RTP, said: "For centuries, Portugal explored the world by sea. Today, Lisbon is more and more the city of all colours, a great harbour of cultures and sounds that welcomes you all to come aboard!"

The main logo for the contest is a sea shell, but 12 other derivations are predicated on the concept of the varying life in the oceans. Through these multiple logos, the creative concept portrays key themes such as diversity, respect and tolerance.

Explore the full haul by clicking left to right in the gallery below.

Jon Ola Sand, the EBU’s executive supervisor of the Eurovision Song Contest, said: “We are extremely happy with the creative theme and logos for this year’s contest, which resonate with Lisbon’s history and underscore Eurovision’s core values, including diversity, very well.

"The Ocean connects all of us, and its variety can provide good inspiration for each of the 42 participating broadcasters that we look forward to seeing in Lisbon next May.”

The Eurovision Song Contest final will take place on Saturday 12 May.