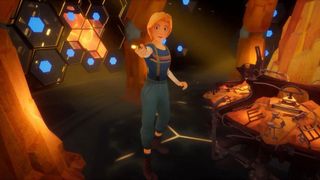 The BBC has launched a brand-new Doctor Who virtual reality adventure that is available on a device near you, today. Jodie Whittaker stars as the Time Lord in Doctor Who: The Runaway, an epic animated episode in which the viewer gets to become the Doctor's companion.

Aunty Beeb's swanky VR hub is the biggest indication that VR is gearing up to go mainstream. There haven't been too many examples of TV shows using the futuristic medium of virtual reality, and arguably none as high profile as Doctor Who. So this is a bold step for BBC content and Doctor Who's fanbase seems like an on-brand choice for this major launch. There is certainly major scope for VR character design amongst the iconic range of characters.

The BBC has released quite a few VR experiences so far (an exploration of life during the Blitz and an interactive fairytale are an example of what's currently downloadable), but Doctor Who is its first major TV show to get the interactive treatment.

Zillah Watson, head of BBC VR Hub, says: “This is the most ambitious project yet from our team... and the result is a magical adventure that Doctor Who fans everywhere will simply love. It also shows the enormous potential that virtual reality has for creating new kinds of experiences that appeal to mainstream audiences.”

The 13 minute mini-episode starts with a space collision and is a race against time to get a pretty cute teenage alien back to his home planet. Although interactive elements are reasonably limited and the viewer is kept relatively stationary, you get the chance to pilot the ship during this emergency situation and the viewer is rewarded with an in-depth look around the 13th Tardis, which will please fans. And the magic of Doctor Who is certainly amplified by the animation from Passion Animation Studios.

And you don't need to miss out on the chance to disappear inside the iconic Tardis because the Beeb will also be sending the experience to 40 local libraries, so you don't even need a VR headset to take part.