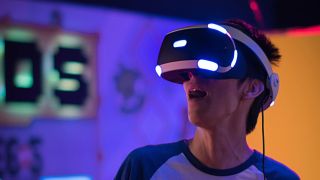 VR and AR have been around a while now, and we're at the point where brands are really starting to embrace these tools. But that doesn't mean the experimental design stage is over – in fact, interaction design is heading in ever more weird, wonderful and mind-melting directions.

It was a hot topic of discussion at the recent Digital Design Days in Geneva. We caught up with one of the key speakers, a leading experience design expert, to hear their predictions for where the worlds of VR and AR might be heading next.

01. Social VR will get much bigger

Social VR and AR – platforms where you can enter a virtual world and socialise with others, via their avatars – is about to become a big deal.

"It's soon going to become like one big internet where we just go into this space together," says the speaker. "I think why people do that will be defined more and more. Instead of just hanging out in a room alone, we'll have a goal, like: this business meeting, or Skyping with someone you care about."

02. We'll defy the laws of physics

The fact is, we can do pretty much whatever we want in a VR space – but at the moment we're still we're working within the laws of physics. Soon, we're going to start to throw these laws out of the window, and stop seeing VR and AR as a kind of 'skin' on top of the real world.

"I think we're going to move away from the physicality and embrace [the possibilities] digital spaces bring for us. It's going to be things like gravity, or being able to place objects 'up there'," they explain, gesturing up into the sky, "things that a digital space will allow us and afford us to do."

One big trend the speaker sees on the horizon is that there will be a lot of more sensors around eye tracking. "Eye tracking is going to be something that we will explore, and that is a sensor that we'll come into contact with in our everyday interactions in VR and AR."

Just as the rules for interacting online are different to those we use in real life, we will develop new conventions for sensor-based interaction. Think about how we deal with those we don't like in a traditional online space: we are able to block or delete them. But doing that in, for example, a social VR space, is a very different prospect.

The fact is, we're copying from other platforms at the moment, but there are a number of patterns that, when translated into VR, offer a very different prospect. We'll need to find new ways to deal with those challenges.

Further to the point about etiquette comes something even more serious: the rights of human avatars in VR. "What is a human right, in this space? I think that's really interesting to explore," says our expert. The answer, they think, is so complex that it shouldn't be left to the designers at companies such as Facebook to figure out.

"We should sketch that out together, like as a global team! We should be sketching these notions of how we deal with harassment. It's hard. I think it's something that needs to be collective thinking."

06. We'll start designing for the other senses

VR and AR do incredible things in the field of vision. But what about the other senses? We're seeing people starting to explore brand new areas of interaction design, working with haptics, smell, food and flavours.

"I personally think food is a really interesting area, because we all eat food and affects us highly," they enthuse. "Another area people are exploring is toxins. The ability to sense a toxin, and notify or learn about if something [around us] is toxic. There are a lot of invisible things in this space, and toxins are one we can create sensors around, and that's fascinating."

While much of the focus thus far has been on VR headsets, it looks like the good ol' smartphone is going to become the main tool for AR experiences.

"I see ubiquitous hardware, like phones, becoming a big leap into the world of AR because everybody has the hardware," says our expert. Head-mounted displays have impressive capabilities, but they're typically expensive, which limits access. Making smartphones the main tool widens the audience for AR experiences massively.