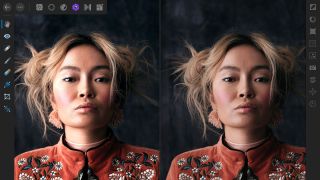 Affinity Photo for iPad is Apple's reigning iPad App of the Year, and it recently received an update (read on to find out more about the exciting improvements and new features). To celebrate, developer Serif is offering you the chance to pick up a copy of its top photo editing app with 30 per cent off the usual price.

Version 1.6.9 builds on the success of the initial launch with some exciting improvements. There's hugely expanded support for touch gesture control, a refined interface, improved brush management and performance tweaks to help smooth out your workflow. It also introduces a new Export persona, which enables you to instantly export multiple slices and layers.

Existing users can download the updated version of the tool free of charge at any time, but if you've been holding off buying a copy, now's the time to do so. Take a look at the video below to find out more about the updates.

"We broke new ground in being the first to bring a desktop-class professional photo editing tool to iPad, and just this week we've reached a quarter of a million users," comments Serif MD Ashley Hewson. "As we've talked to our users, witnessed the inspirational work they create and understood more about their workflows, it's inspired us to keep pushing the boundaries of what's possible on a mobile device."

It's been a busy month for Serif, with the long-awaited beta launch of Affinity Publisher generating plenty of excitement a couple of weeks ago. To find out more about Affinity Photo for iPad and Affinity Publisher, head to the Affinity website.