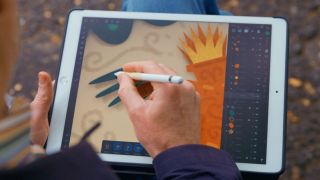 Last week saw the launch of Affinity Designer for iPad, the first full-spec vector graphics app for the device. Armed with features from the Apple Design Award-winning versions previously available on Mac and PC, this iteration of Affinity Designer hopes to go toe to toe with Adobe Illustrator.

Serif, the developers behind Affinity Designer, had to completely reimagine how graphic design works on a screen for its iPad release. Artists, illustrators and designers worked in close collaboration with the Affinity Designer team to fine-tune the app so that it delivers everything a creative professional could ask for while on the move.

Capable of slotting right into a professional workflow, Affinity Designer's export engine can manage all the major file types. This makes the app perfect for working on preliminary drawings, right the way through to developing vector art and handing off the finished design.

To give you a glimpse of what to expect from Affinity Designer, which you can download for a 30% discount price of $13.99 / £13.99 / €14.99 (subject to local currency variations), watch illustrator and graphic designer Steve Simpson put the app through its paces below.

One of the headline features from the launch is the pencil stabilisation for vector drawings. This feature allows users to create curves with pinpoint precision, resulting in the smoothest and most accurate lines possible with a freehand pencil and brush tool.

And with roughly 100 brushes built in, Affinity Designer for iPad gives artists plenty of options to test out this feature. Covering near enough every requirement, these brushes make it straightforward to add rich media textures to designs.

Another standout addition is the ability to zoom in by a hyperbolic-sounding 100 million per cent. With this level of zoom users can ensure their work is as accurate as possible. If you're after a more rough-and ready hand-drawn finish, you can of course toggle this feature off.

In another workflow game-changer, Affinity Designer for iPad is capable of switching effortlessly between vector and raster work. Users can also simply drag and drop files into emails, making it quick and easy to bring projects out of Affinity Designer and share them with others.

There are also advanced layering options. These include 22 non-destructive adjustment layers that fire up previews instantly. Capable of being edited at any time, these can be manipulated by the most advanced layer controls available in any vector-based app.

The release has been seen as Serif going head-to-head with Adobe, but it also hopes to on-board people who use Sketch thanks to a Symbols panel that makes short work of providing reusable elements.

Rounding off the launch of Affinity Designer came the announcement that Serif will be launching its InDesign rival, Affinity Publisher, later in the year. And if you want to get in on the ground floor with this iPad tool, you can already sign up for the beta release.