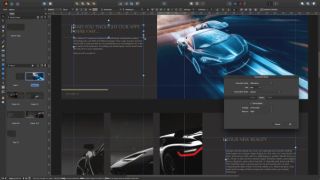 It's an exciting day for Affinity fans and designers looking for software to streamline their workflow as the free beta of Affinity Publisher has just been launched. Following in the footsteps of the Affinity Designer launch a couple of months ago, Affinity Publisher is now available for Mac and Windows users to download and test for free – an iPad version will follow later.

Boasting full integration with the popular Affinity Designer and Affinity Photo, Affinity Publisher is a professional desktop publishing app that will allow users who own all three tools to edit vector designs and images in one place.

The arrival of Affinity Publisher has been a long time coming. Some users have been drumming their fingers in anticipation of the launch of Affinity Publisher since 2016, so it will come as some relief to learn that the first retail version will be released later this year. And with this bundle of three apps from Affinity, some may find themselves turning away from Adobe's Creative Cloud.

"From the earliest days of visualising the Affinity range, we planned an unrivalled trio of sleek, super-modern apps created to work with the latest technology – ultra-fast, with stunning power and completely stripped of bloat," says Serif Managing Director Ashley Hewson.

"The final step towards realising that initial ambition will come with the launch of Affinity Publisher. It’s an all-new app which we believe will revolutionise desktop publishing in the same way Affinity Photo and Affinity Designer have shaken up professional photo editing and vector graphic design."

The headline capabilities of the creative desktop publishing software include advanced typography options, linked text frames, master pages, and facing page spreads. On top of this, users will also be able to work with dynamic photo frames, tables, baseline grids and linked resources, all backed up with end-to-end CMYK.

Upon the launch, Hewson was keen to point out one thing: "It’s a beta, so there will be bugs and areas of the app which are not yet fully polished, so we don't recommend you use it for any important production work at this time.

"We are relying on beta users to let us know what works and what doesn't," he adds. If there are any features that need adding, let us know. Even if we don’t get them in before we release version 1, you can expect plenty of free updates to come, just like with our other apps."

Among these updates are buttons that allow users to toggle between Photo and Designer within Affinity Publisher. Although these buttons can be seen, it won't be until later in the beta period that they will be activated.

News of the Affinity Publishing beta launch is sure to be welcomed outside of the software's existing users. For creatives frustrated with Adobe, InDesign has been one reason they've stuck with the platform for so long. But with the promise of Publisher on the horizon, this could be the reason they've been waiting for to jump ship and download Affinity.