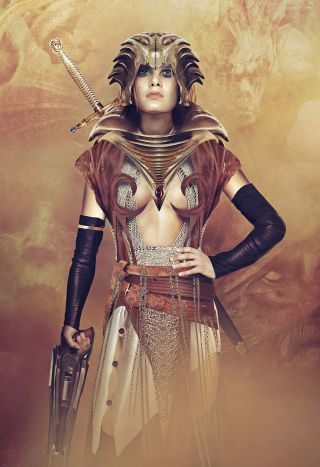 Creating costumes for a fantasy character design requires a lot of research: there are many questions to answer before you even begin your painting process. Skimp on this stage and your clothing ideas become little more than eye-catching concepts.

I was recently asked to work on Hellboy: Rise of the Blood Queen. I presumed that it would be creatures, antagonists and mutants, as is normally the case in my dark corner of conceptual art. To my surprise, the commission was for pure costume design.

I love a challenge, so I embraced it, but I had to adapt quickly. Costumes have always played an important role when concepting characters; they add to the visual tone. Costume design is a different discipline, but all characters need clothes, so how hard could it be?

Turns out it requires far more precision and a hell of a lot of research. Here, I’ll share with you my findings, work process and tips that will help the development of your characters’ costumes. I’ll be focusing on two costumes created for one character: a standard costume and a battle armour version. Let’s suit up.

Who is your character? In my piece she’s the captain of the royal guard in a fantasy world. A young princess, a warrior, a rebel. For her costumes I want to first present a formal/military outfit with the basic armour tech on show, and for the second, a battle-ready armoured uniform. I want them to work in unison and the armour to be a key feature in both designs. She has to be edgy and have attitude. I collect references of faces and costumes, and create a series of mood boards.

02. Reflect the world she lives in

This is a large part of the research phase. You have to understand the world that your character inhabits. In this instance I’m going for a futuristic world with a slight Renaissance vibe, so of course I’ll need to show this in the design. I look through some of my older pieces to help me develop a starting point. I’m not looking to get down pose or detailing ideas – just the general tone of the piece.

Decide on the right tone and maintain it throughout the design. A good way to do this is in the presentation style. I’m going for a semi-retro look: a pale beige background with a border. It helps to sell the tone from the outset, while ensuring your costume design is front and centre. I’d refrain from using any imagery in the background, although an exception would be a close-up of the character’s head, such as in this earlier piece of mine: Evil Lyn from Masters of the Universe.

You’ll need to pose your character so that the costume’s clearly shown, but don’t make the stance dynamic. The goal is to present the detailing of the costume, not create a character illustration. I often choose a simple fashion model pose. Look at fashion magazines and collect online gallery stills of fashion models in action. There are plenty of fashion croquis (quick sketch) templates available online, too.

05. Everything starts with a sketch

I concentrate on lines that represent folds in any fabric, and create interesting shapes and patterns. For example, the V-shape in her armour is repeated in her dress and overcoat. I keep these initial sketches simple, and focus on flowing lines and blocks of colour.

06. Be inspired by your materials

As a concept designer, you don’t really think too much about materials, fabrics or indeed how an actor would wear an outfit. But as a costume designer often your ideas come from a particular type of material, so keep that in mind when you’re sketching. Create mood boards and place images of materials next to your design elements. Then explore different variations, colours and textures.

On a standard character illustration I’d place a third of the figure in shadow to add more depth. I’d also add elements of dynamic lighting, and blur parts of the scene to enhance the mood. However, for costume design art you should forgo the shadows and keep the lighting to a minimum, to clearly show off the outfit. This might go against your instincts as an artist – the figure might look flat, like an unfinished painting – but resist the urge to properly render the scene. If you do, you’ll only dilute the message that the design is trying to communicate.

Don’t overwork the image. Maintain clear lines, defined details and recognisable textures. I keep my lines on a separate layer so I can quickly refer to them. A good design is not only recognisable, but easily recreated, too. Think about structure in relation to the material. For example, the armour’s made from a bronze and steel material, so my lines are sharp and heavy to emphasise how tough it is.

This is where it gets tricky, when you put on your practical hat and start asking more questions. Is the armour placed on or strapped on? How does it work? If it’s high-end tech then perhaps it can be multi-layered and unfold from a central device. Furthermore, what’s the theme of the armour?

Here, I’m going for a subtle snake theme mixed with a retro 1920s vibe. I want it to look like it grows, so I create two versions: one before and one after it’s activated. Again, take into consideration how this might look in real life. Something too big and bulky will look unrealistic.

Repeating motifs and identifiable fashion elements help to maintain a sense of consistency between the character’s two outfits. For example, the triangle theme that’s evident in the coat and dress now appears on the body armour. The snake motif, while subtle, appears on the helmet and the sword if you look carefully enough, as well as within the central body armour section.

Keep each piece of clothing on a separate layer. I create my imagery in black and white and then add a layer of colour followed by the texture or details. This enables me to change elements at any time. There’s nothing worse than finalising your image, only for the client to request a quick colour change. Or even worse, ask to swap out the materials of a particular piece of clothing.

12. Illustrate more than you can see

The final design with all its layers will often hide elements of the clothing that a client may want to see later. Pre-empt this by illustrating everything in layers and completing each layer of clothing. Think of the process like dressing a doll: start at the beginning and up build the layers. This will also help illustrate how one piece of clothing may hang or interact with another.

13. Give your character suitable accessories

This is often an afterthought of costume designers. Designing accessories such as weapons – guns and swords, for example – is my favourite part of the process. I take the time to hone the design of these accessories so that they have a character all of their own. One approach is to imagine them as a toy line. What would make them stand out on the shelf? What would make you buy it? Note that the gun follows the same V-shape design elements as the costume itself.

Using Photoshop is extremely handy at times. You can anticipate most client changes ahead of time by simply working in extra layers. I always create modesty layers: one image to sell the sexy nature of the character and another more realistic ‘costume’ layer that covers up any exposed areas of skin deemed to be too racy.

Once the design is signed off I often do a ‘magazine’ edition. This is a glossy showcase version that’s for my own collection, and are perfect for promo work. Remember that your costume design images are often only ever seen in-house.