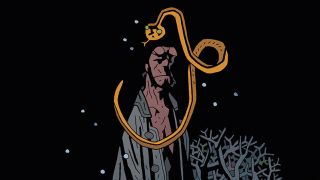 “I’ve never taken a significant chunk of time to just do work essentially for myself,” says Mike Mignola, the prolific artist and writer behind Hellboy, who recently announced that he has decided to pause work on the series and focus on personal projects. “I’ve no idea where it’s gonna go,” he adds, “but it’s exciting. It’s what keeps me going.”

This is uncharted territory for Mike. Previously, the Eisner award-winning artist has had plenty of work lined up and demanding his attention. But it was a painting completed in his limited spare time that sparked a realisation. “I only average about one painting a year, and the last painting I did, I actually really liked,” he reveals. “So I thought, ‘Gee, if I do a bunch of paintings, maybe I’ll actually figure out what I’m doing instead of relearning every year.’”

Even though this is the end of the road for now when it comes to Hellboy, Mike stresses that he still has plenty of other projects to keep him busy. “I can’t really take a year off – I’m co-plotting Bureau for Paranormal Research and Defense, but I’d like to take a year off from drawing any kind of comics.”

Considering Hellboy is one of the most critically acclaimed comics from the past three decades, Mike’s decision not to focus on the series has understandably made waves in the graphic novel community and beyond. “Mike Mignola is the smartest comic book artist of his generation,” says iconic comics creator Frank Miller. “He puts his words and his pictures together with great care and makes it all look very easy.”

Previous work on Gotham by Gaslight and Cosmic Odyssey had already garnered Mike a lot of fans, including Catwoman artist Adam Hughes. “I was on board with Hellboy from day one,” he enthuses. “I admire everything about it: the art, the writing, the design, the world-building, the sheer uniqueness of the voice of the storytelling... all are head and shoulders above the rest. Mike Mignola’s Hellboy makes every day seem like Halloween, and Hell a pretty cool place to visit.”

Heavy Metal veteran and Hellboy artist Richard Corben observes that the series was a source of inspiration for a generation of cartoonists. “His comic art is beautifully simple, so simple that other cartoonists think they can emulate his style, which is futile:” he explains. “He’s one of the best. Congratulations on your masterpiece Hellboy in Hell, Mike.”

With discussions about bringing out a third Hellboy film, together with rumblings over a television series, this might not be the last we’ve seen of the character, but Ultimate-Spider-Man writer Brian Michael Bendis insists that it’s the creator who’s remembered. “Mike is so excellent, so consistent, that my fear is that people may take it for granted. Do not. He is one of the great comic legends of all time, and we get to watch him live.”

You can keep track of Mike’s upcoming projects at The Art of Mike Mignola.

This article was originally published in ImagineFX magazine issue 138; buy it here.