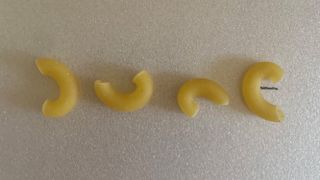 A new logo for an adaptation of Dune has been leaked, and it's causing all kinds of drama. We'll start by pointing out that it's obviously not the one above. That's a fan-made recreation in pasta, and we'll get to why that's our header image in a minute.

There are a couple of variations of the actual Dune logo doing the rounds online, but the one causing the most upset is shown below. It uses four U-shapes in different orientations to spell out the title. Cleverly, this super-minimalist design can be flipped vertically and still read the same (see our logo design tips for more inspirational examples).

The problem people are having is that, while it's clever and sleek and sci-fi and all that, it's not hugely legible. Especially that 'E', which, let's face it, is actually a 'C'.

A curve-ball in the story is that the leaked photos from that French conference show a slightly different version of the Dune logo, which is apparently what the actual logo will look like. This one has a lens flare (or eclipsed planet, if you prefer) to represent that problematic missing crossbar.

Check out the Director and Cast and know this is the Movie of the Year 2020 #Dune pic.twitter.com/LijTBcWx4uJanuary 30, 2020

Which logo, if either, is the right one, remains to be confirmed. There's certainly something controversial going on behind the scenes at Warner Bros. But all that hasn't stopped the wave of 'fixed' logo versions making their way on to Twitter. Here's our pick of the best, which range from snarky but hilarious to actually good.

I kind of like that new Dune logo pic.twitter.com/ELhDKO5oxsJanuary 29, 2020

While the logo is proving contentious, fans of the Frank Herbert’s sci-fi epic seem to be feeling positive about this Denis Villeneuve reboot. We'll update this article as we know more.