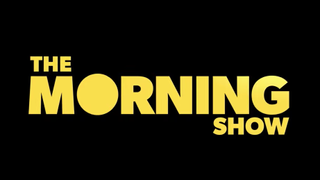 One of the basic rules designers should know about logo design is that their creations need to look original. Apple doesn't appear to have got that memo though, as the logo for its upcoming web television series The Morning Show (above) looks startlingly similar to the branding for Elon Musk's tunnelling business, The Boring Company.

The Morning Show, which will air on the upcoming streaming service Apple TV+, has been promoted with a bold, typographic logo. As you can see, the logo features the words 'the' and 'show' positioned above and below the word 'morning' respectively. Meanwhile the 'o' in morning is completely filled in.

With its combination of yellow type on a black background, it makes for a powerful piece of branding. However it's also uncannily similar in lots of ways to the logo for The Boring Company, below.

Similar positioning of words? Check. Filled in letter 'o'? Check. We can see why Reddit users on r/BoringCompany are accusing The Morning Show logo of being a rip-off. Perhaps Musk needs to read our guide on how designers can deal with plagiarism.

The similarities are all the more galling because The Boring Company is a great company name with a brilliant logo. The filled in black 'o' is the perfect visual representation of what the company does (drill tunnels), and even its name is an amazing bit of wordplay. Meanwhile the logo for The Morning Show turns its letter 'o' into a golden sunrise, which is just as suitable. But The Boring Company got there first, dammit.

According to a logo patent unearthed by The Verge, it looks like The Boring Company has its branding covered from a design point of view:

"Colour is not claimed as a feature of the mark. The mark consists of the terms "THE BORING COMPANY" in black and white. The article "THE" appears on the top left side of the term "BORING" and the term "COMPANY" appears in the lower right side. The vowel "O" in "BORING" is shaded."