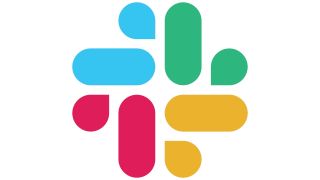 You've got to feel sorry for whoever mans Slack's Twitter account. Only recently they were at the coalface of dealing with angry tweets from designers outraged that the workplace chat app had changed its logo. And now they're having to go through it all over again thanks to a tweak to the design that aims to make the logo easier to spot.

This latest update to the logo design is a change to the background colour of the mobile app icon, which has switched from a plummy purple to a crisp white. The audacity.

Starting today, you may notice your Slack mobile app icon change from purple to white. This should make it a little easier to see on your device. Visit the Google Play or Apple App Store to update.February 26, 2019

Back in January, the new Slack logo, which was created by the app's in-house design team in collaboration with Michael Bierut and Pentagram, was met with widespread disapproval by the design community. Many were sad to see the old logo go, and criticised the new one for looking generic.

Avid readers of Creative Bloq might remember that we came to the defence of the new logo. As the Slack team pointed out, the old design just wasn't fit for purpose anymore, and the new icon even tried to make the transition easier by using a similar colour scheme.

Sadly, this was not enough to placate the wrath of keyboard critics. As Slack has repeatedly said in hand-wringing replies to these tweets, it's listening to all the feedback and the team is taking everything on board to make improvements.

It's just a shame that this has lead to more irritation, as users are arguing that the design now looks more generic than ever.

I usually sort my app icons by color because it's easier to look at and remember but this is just getting confusing. 🙈🙈 pic.twitter.com/vQatzi9xJAFebruary 27, 2019

Small bit of feedback - I'm finding this a tad confusing. Would be nice to have the option to change to a colour of my choice - this would definitely increase "discoverability" on my homescreen #NeonGreen pic.twitter.com/PDLi6oKNUGFebruary 26, 2019

Plenty of designers have entered the bargaining stage of grief, begging Slack to give them the option to change the background colour according to their preference.

Sadly this isn't on its roadmap at the moment, so it's a case of like it or lump it. Desktop users aren't safe either, as Slack says that this icon will follow suit and adopt the white background.