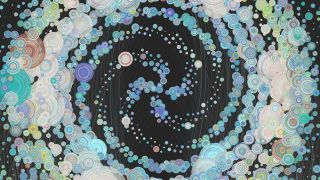 British designer and artist Brendan Dawes mixes digital and analogue materials to explore the interactions between people, objects, technology and art. As well as authoring two books on interaction design – Analog In, Digital Out and Drag, Slide, Fade – Flash ActionScript for Designers – he's worked for clients including Airbnb, Google and Twitter.

Next month, Dawes will be speaking at Something Good – a new two-day design festival in Bristol, UK (Creative Bloq readers can get 20 per cent off tickets with the code: CreativeBloq20). We caught up with him ahead of his talk.

How would you describe your work?

The feedback I often get is my work seems very human, even though I work mostly within the digital world, which maybe sometimes can seem quite cold. I'm not sure it's a conscious effort on my part, that's just how I am and how I think about things.

Did you have any bumps in the road or make any cringey mistakes in your early career? (Our first commissions article has a classic mistake, for example.)

All the time, but that's how you learn. Very early on I'd do work without a contract, which I wouldn't advise anyone to do. But when you're starting out you're just excited to be working on something so you think asking the client to sign a contract might in some way sully that relationship, which of course it doesn't. Also try to avoid working with sociopaths.

Do you make time for personal projects, or have any habits to nurture your creativity outside of your main work?

Yes all the time, or at least when time allows, though really they're all part of my work output – I don't really separate the two. Often even when I have a deadline I might spend the morning doing something seemingly unconnected because at that moment I feel the need to do something else.

That might be something physical, maybe an electronic thing or just simply writing a letter to someone and taking time to get the paper and envelope just right, or it might be writing some code for an idea I have that I might use at some point later on.

Personal projects for me are important because they act as a beacon for what I'm about, like the Plastic Player I created, born out of my love of both analogue and digital music and how I might merge the two. That project got quite a bit of attention and so I would encourage anyone else to do the same if you're trying to get your name out there.

What’s the secret of your success?

I wish I knew! I don't think there's any one thing, I guess it's more of a collection of things: put work out into the world that deserves to exist; be prepared to fight for your work; realise that clients are not the enemy – most want to help you make great work; and practice, practice, practice.

Also don't be a dick; learn new things all the time; don't worry what everyone else is doing; become an expert (as much as you can) in your own work; stay off Facebook; be curious and be interested in things other than your immediate work; be yourself; and be generous.

How do you deal with vague creative briefs?

It's up to me to dig deeper. Have a conversation with the client. I mean an actual physical conversation. When you talk to someone there will be nuanced moments that will arise and they might be the gold you're looking for. That rarely happens on email.

Together with that, I sketch what I'm thinking – sometimes in pencil, sometimes as little coded things. I make lots of iterations early on that I show the client, creating something to criticise so that I can get that conversation going.

What sorts of themes or advice can visitors expect from your talk/workshop at Something Good?

Well to be honest I'm still figuring out what I'm going to talk about, but I think a theme that constantly runs through my talks is attempting to create work that resonates with people in more nuanced ways rather than huge but vacuous epic moments.

If I had a barometer made from film directors, I want to be at the Terrence Malick Malick end rather than the Michael Bay end of the scale.

Hear more of Dawes' story at Something Good in Bristol, UK, on 6-7 October. Creative Bloq readers can get 20 per cent off tickets for both Friday's talks and Saturday's workshops with the code: CreativeBloq20.