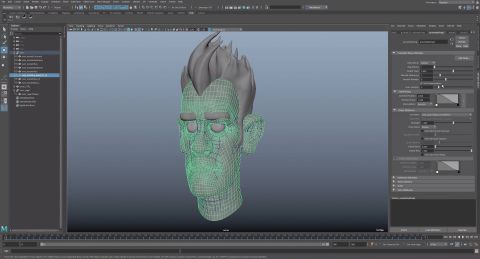 There is a lot to be excited about with this release, which sees a host of new features and improved performance, plus long-awaited Remesh and Retopology tools.

Autodesk has released Maya 2020: the latest update on its 3D modelling, animation, visual effects and 3D rendering software. I've been using Maya for almost two decades now. I remember the days when you needed a Silicon Graphics machine to run it, which was expensive enough, but coupled with the price of a Maya licence you had to spend a small fortune. I'm not sure if the unobtainable price made it a more desirable application, but everyone I knew wanted to work with it.

Thankfully, prices dropped over the years and now Maya is much more affordable, although many still think it's too expensive, especially when compared to other applications like Blender and Cinema 4D (both of which appear, along with Maya, on our guide to the best 3D modelling software).

Since its early days, Autodesk has released updates annually. These usually saw new tools and features being added to its arsenal; these features were welcome additions, but were often aimed more at higher-end animation and simulation work.

Over the past few years, maybe even longer, we have seen a shift in the direction Autodesk have taken with the updates. They are now more focused on improving existing systems and implementing features voted on by the community. This has transformed Maya into a much better, all-round application which continues to evolve and improve in a more focused way.

With Maya 2020, Autodesk continue this trend of listening to their users to implement much-needed quality-of-life features. They also enlisted Blue Sky Studios to help mold the animation tools, which have also seen a huge upgrade in this release.

Autodesk boast over 60 new animation features, with the biggest being improvements to the animation cache playback. Originally introduced in 2019, cache playback allowed animators to view their work in real time with little or no need for constant playblasts. This was the idea anyway, but it came with limitations. The first was a lack of dynamics support, so it couldn't be used alongside these systems. Image planes still relied on legacy systems, so they were slow and hogged memory, and it wasn't as efficient when used with dense geometry.

These issues have all been addressed and make for a smoother experience. Dynamics support is included, using a new layered evaluation system. nParticles, nCloth and nBodies are now supported, with nHair, Bifrost FX and muscle systems coming later.

High-resolution geometry or subdivision surface models that used Smooth Mesh were not efficient enough in 2019. They used a lot of memory and were slow to cache. In 2020, the base mesh is stored while smoothing is now handled on the GPU.

Speaking of the GPU, another big update this year is Arnold 6 with full GPU rendering support, based on the NVIDIA OptiX ray-tracing engine. This has been in beta for a while but it's nice to see a full release. I've been using this more and more since I installed 2020 – it's so fast, although I am running an NVIDIA Quadro RTX 4000 so I'm not sure how it would run on lower-end cards. I no longer need to render to see model and shader updates, as they are visible in the viewport in, almost, real time.

On the modelling side of things, Autodesk have given us Remesh and Retopology tools. "It's about time!" I hear you scream. When combined, these tools will enable clean, quad-based topology but it has limitations. As good as the resulting models are, there are no options to dictate edge flow, so for game art there would still be a lot of clean-up needed.

It seems Autodesk are now taking full advantage of the GPU as it's being used on many other tools to help speed up workflow. The Proximity Wrap tool, which is new to Maya, is an advanced version of the Wrap tool. It too uses the GPU to help calculate how the influenced geometry manipulates the surface model, making for smoother interactions. I'm looking forward to experimenting with this on future facial rigs and custom muscle systems.

While we are on the subject of rigging, another new addition I am personally excited about is the introduction of matrix-driven workflows. These are a series of nodes and attributes that make rigs cleaner and less cluttered. With the offsetParentMatrix attribute, constraints could be used less and less, meaning the art of rigging is more streamlined.

The one issue I do have with the new rigging tools is they aren't backwards compatible. I have many clients who still use Maya 2017 and 2018, so for me, these shiny new nodes aren't an option just yet.

There is so much to be excited about with this release, and I haven't even covered the modelling and speed improvements. All in all, Maya 2020 is an essential upgrade if you're an animation studio. With all the new updates, it could save you a lot of time on your projects.

There is a lot to be excited about with this release, which sees a host of new features and improved performance, plus long-awaited Remesh and Retopology tools.