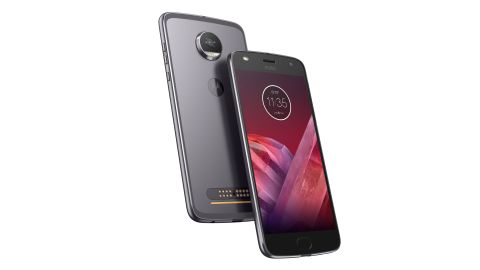 Using a truly innovative approach, mods can quickly transform the Z2 Play smartphone (and others in the Motorola range) into a top optical zoom camera or a rather nifty projector. We love the idea and the execution.

The Moto Z2 Play is a smartphone with a difference, with plenty to interest creative professionals.

It’s an innovative modular smartphone that enables you to clip on different ‘Moto mods’ that turn your phone into something a bit different – with additions including a Hasselblad zoom lens, a projector and extra battery pack.

The Moto Z2 Play itself is a mid-range Android handset, so don’t expect the build quality or screen of a Samsung Galaxy S8, say. That said, it feels great in the hand, with an all-metal design that’s only 6mm thick. It’s also extraordinarily light.

Screen-wise, the Moto Z2 Play has a 5.5-inch AMOLED Full HD (not Quad HD like say, the Galaxy S8 or Google Pixel) panel that is bright and crisp.

And the phone is fast, too – Adobe’s mobile apps ticked along perfectly and were great to use on the large screen.

The phone charges – like many modern Android handsets – via USB-C, and will charge to 80 per cent in around half and hour thanks to Motorola’s rapid charging tech.

And we easily got a day from the battery, even when using the Hasselblad mod (discussed below) quite a bit.

The Moto Mods are where the Z2 Play really innovates and will interest the creative professional. Moto Mods are essentially snap-on devices that connect to the back of your phone (they will attach to any phone in the Moto Z range) via a strong magnet.

They cost extra – significantly extra in some cases – but do genuinely transform your phone into something very different indeed. And when you consider the fact that the phone itself is only £380/$410, you can beef it out with a few add-ons for less than a Galaxy S8 or iPhone 7 Plus.

Let’s look at the Hasselblad True Zoom mod first. A few manufacturers have tried to merge smartphones and high optical zoom phones, but none have really succeeded, mainly because of the bulk it adds to a pocketable device.

The True Zoom, by clipping on the back of the Z2 Play, turns your smartphone into a 10x optical zoom snapper. Coming from Hasselblad – a company with its traditions in medium format photography – you'd expect the optics to be good. And they are. And it shoots in Raw format photos.

Not only does it take great shots – the camera app recognising the mod and giving you further options – it also feels great in the hand. Our one criticism would be that the shutter feels a little mushy – it needs to be a bit more defined in its action.

Oh, and there’s no built-in battery, so it will drain your smartphone’s if you use it too much. But if you are looking for an excellent camera with the ability to zoom without losing any quality, it’s a good add-on at £135/$250.

The other mod we got to test was the £151/$299 Moto Insta-Share Projector. Now, we know what you’re thinking – a projector clipped onto a smartphone can’t be any good. We thought the same, but we were wrong.

Sure, it’s only 480p, and it’s not the brightest, but we were able to project a 70-inch version of our Photoshop Sketch file onto our wall – and the quality of image was great.

You probably wouldn’t use it for important client presentations – your laptop is a more obvious tool for that – but for quickly demoing projects and showing off images on your mobile device, it’s a cool gadget to have. (You could use it for full-blown presentations though if you wanted.)

And of course it’s great for viewing photos or movies stored on your phone: just project onto a white wall.

It’s got a 1,100mAh battery built in, so won’t drain your Moto Z2’s battery too quickly – we got around three hours’ of projecting time (with the built-in battery quoted as one hour). But you can plug your phone in to charge while projecting.

Other mods include a battery pack to keep your phone juiced for longer, and a speaker by JBL. But the two above are by far the most interesting to us.

The Moto Z2 Play isn’t a top-end smartphone with the processing power of the Galaxy S8, for instance, but its approach is truly innovative.

No other manufacturer is pushing the boundaries in design or functionality – and that’s what makes this worth a look.

Using a truly innovative approach, mods can quickly transform the Z2 Play smartphone (and others in the Motorola range) into a top optical zoom camera or a rather nifty projector. We love the idea and the execution.