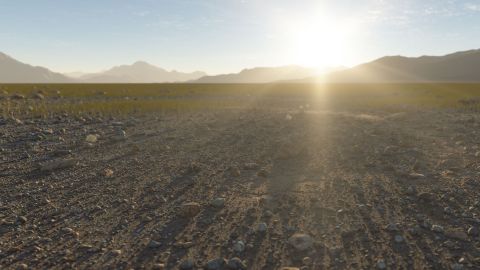 Newcomers might find it a challenge, but for the price Terragen 4 delivers astonishingly realistic landscapes

When taking Terragen 4 for a spin, the first thing you notice is its speed. If you load some old, dense scenes created in v2 or v3 of the environment rendering software, you'll be happy to see how much faster it's become, even on a single-core system running a humble GTX 970.

This is thanks to the new render engine enhancements, and Planetside isn't lying when it says Terragen 4 can render poly-heavy scenes up to 500 per cent faster. Run it on something like a W9100 with two 2.3GHz Xeons and 64GB RAM on board, and you get almost instant renders, even at high resolutions.

That speed also translates into one of Terragen 4's new features: the new raytraced preview option, which enables you to finally see your scene and its set up properly – atmospherics, volumetrics and shaders included.

Terragen's best feature has always been its incredibly realistic natural render output. This is even better in version 4, which now sports Ozone settings. The absorption of light is one of the hardest things to get right in any renderer, especially when adding clouds, but in Terragen 4 this works really well. It will probably save a lot of us forays into Photoshop to tweak the colours that tone mapping didn't quite get.

This goes for camera settings, as well: you can now get bloom and starburst at rendertime, (almost) no postwork needed.

It also seems the Terragen team made an effort to give new users a gentler entry curve by improving their mostly procedural shader presets. These range from new shaders for such features as the new, impressive multi-scattering function in clouds, to improvements to the existing terrain shaders.

However, Terragen's powerful node network and new functionality are still not as accessible as the offerings of its rival Vue, which also provides an easier pipeline integration and a more accessible shader and tweakable ecosystem library out of the box. That's not a major issue for experienced landscapers, but definitely one for newcomers.

So how does Terragen 4 compare to its main competitor? As far as speed goes, it leaves Vue's offerings in the dust. An xStream import running Corona 1.5 on a set of Xeons ate into some of it, but Terragen 4 stayed solidly in the speed lead. Vue 2016 probably beats Terragen 4 in the accessibility department, though.

This aside, Terragen 4 is worth every cheaper-than-Vue penny – no other renderer out there can give you the same landscape or nature realism that Terragen provides at the price.

Newcomers might find it a challenge, but for the price Terragen 4 delivers astonishingly realistic landscapes