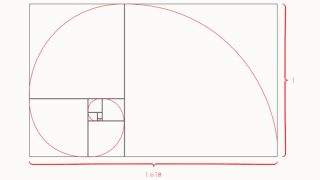 Favoured by artistic greats including Leonardo Da Vinci and Salvador Dali, the golden ratio is a proportion that creates beautiful artwork based on pure mathematics. And thanks to the clever folks at Company Folders you can learn all about it in this handy infographic.

Inspired  by the asymmetrical patterns found in natural structures such as plants  and insects, the golden ratio is based on a string of numbers known  Fibonacci sequence. Basically, it boils down to an aesthetically  pleasing ratio between two different sizes that boils down to a  proportion of 1:1618.

You might have seen the golden ratio visualised with seashell-shaped spirals superimposed on famous pieces of  artwork. It's still difficult to get your head around the concept of the golden ratio, but this quick-fire method and infographic are a couple of ways to see the harmonious method in action.