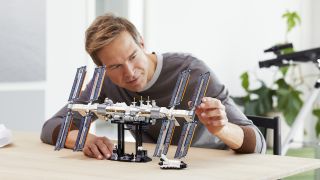 Lego and space have a storied history together, from the classic blue and translucent green of the ’80s space sets to the great NASA-accurate sets below. The best Lego space sets of 2020 might be a bit more scientifically accurate than the older sets, and they're all the better for it.

The best Lego space sets include a mix of scale models of real space craft that are perfect for adults or older kids, while the range of Lego space playsets are great for kids as young as five. Even the playsets were developed with input from NASA, though, it offered insight into the kind of equipment it expects humans to be using when we start making trips beyond the moon.

We've broken the sets down into the real space craft aimed at adults, and then the sets aimed at a younger audience – and you'll find the current best online prices for them all right there. Also don't forget to check our Lego sets for adults, and our best Lego Architecture and Lego City sets.

Celebrate 50 years since the moon landing in style

Released to celebrate the 50th anniversary of the lunar landing, this recreation of the Eagle is a glorious display piece. Lego worked with NASA on getting the details right, including the right shade of gold. There are loads of fun details in the Lego Creator Expert NASA Apollo 11 Lunar Lander, from the way you build the lunar surface (including little square footprints for your astronauts), to the fact that the lunar escape module disconnects from the landing gear to rocket away. There’s even an inside to the module, with equipment panels.

A great tribute to one of humankind's most impressive achievements

This has been a long time coming – ISS models would regularly make their way through Lego Ideas (where people submit propositions for new sets to be voted on by the public, and the most-voted will be assessed by Lego for potential release as a set), but Lego never picked them up… until now! This Lego Ideas International Space Station comes with lots of nice touches, including a robotic arm for deploying a satellite, a scale space shuttle you can dock, mini cargo space craft, and microscale figure to head out on space walks.

If you’re into space, science and singular achievements, this is pretty much an essential display piece, especially since it comes on a handy stand.

Out of production, but always in our hearts…

Here’s the thing: this Lego Ideas NASA Apollo Saturn V is no longer made by Lego. It has been retired – possibly forever, possibly not, but definitely don’t expect it back soon. Normally, we wouldn’t recommend things that aren’t actually available any more, but this is easily the best space set Lego has ever made, and you can find it for sale online since it's only a recent retirement, so we kind of have to mention it.

A full metre long when complete, this scale model of the Saturn V is utterly awesome, and meticulously detailed – from its recreation of every portion of the multi-stage rocket, to the little dioramas of the lunar module on the moon and the command module in the sea after a touchdown… and all with microscale figures, as a reminder that this is all to scale!

Moon landing buffs should take note of the number of pieces it’s made from, even – that’s the care and love that was clearly poured into this set. So, if you see it for sale for a not ridiculous price, we can’t recommend it enough. If you're a big space program fan, it's worth it.

A great playset with loads to do

The City range might seem a slightly odd place for the all the following sets in this list to sit, but that’s where this kind of playset tends to go, so fair enough. The next six models in this guide are all from a series inspired by NASA’s plans for future and mars programs, with designs that draw from serious concepts.

The Lego City Rocket Assembly & Transport is our favourite of them, because not only does it have the coolest-looking rocket (which is the most important thing), but we also love the big crane assembly and caterpillar transportation vehicle. And as a playset, the range of robots, vehicles and garage give loads of scope for little explorers to have fun.

Staff up your Lego space facilities the easy way

£34.99
View at John Lewis
See all prices (1 found)
So many cool figures
Some very neat accessories

This Lego City People Pack is a really fun selection of minifigures and accessories: it comes with seven different astronauts, a reporter, a camera operator, a personal trainer, a drone engineer, a rocket engineer, a mechanical engineer and a botanist, plus a robot, a g-force training machine, pizza, space rocks, a test rocket, and more. It’s a really cool set of stuff for kids to free play with and add to their range of other Lego.

Do science, fly a cool shuttle – what's not to like?

This Lego City Mars Research Shuttle is a slick-looking shuttle that opens to reveal space for its two astronauts to sit, and for it to carry a storage drone, perfect for carrying the included geode bricks. There’s also a rover with grappling arm, but the little touch we love the most is the scanning heli-drone, which has a red panel that, when held over a brick of rocky regolith, will reveal a neat ‘scanning’ interface. It’s a great set for budding space scientists.

This Lego City Lunar Space Station is a concept for a small space station, with three modules to it that you can arrange however you like around the central airlock module. There’s a kitchen module, and living module, and a lab module, and they all open up so you can play with the minifigures included. The lab has light-up equipment, the kitchen has a pizza oven (we’re not sure of the NASA accuracy of that bit…), and the living area has a treadmill and bed. There’s also a small shuttle and a detachable satellite, for getting all that busy space work done.

The countdown to a great build is on

This Lego City Deep Space Rocket Launch Control set has a multi-stage rocket with assorted modules, plus a control room for executing your perfect launches, but most importantly it has a funky rail transport system. There’s a range of accessories too, from transport vehicles on the ground to a robot help, to a space telescope satellite that fits in the rocket’s payload module for transport up to your ceiling.

A nice added touch is that the control tower is designed to accommodate a phone with a special countdown app on the screen, for an atmospheric (so to speak) launch event.

Well, you wouldn't drive it for the first time on Mars, right?

You can practise for those martian/lunar escapades with this Lego City Rover Testing Drive set – it has an articulated grappling arm and removable cockpit, plus chunky all-terrain wheels. There’s various rock collecting equipment for its driver minifigure to use when picking up the rock bricks it comes with, and it’s all observed by a technician.