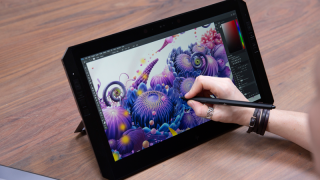 We all know how revolutionary touch has been to user interfaces, but what about digital pens and styluses? They may still be a niche product for consumers, but for a digital artist or designer using one as part of your everyday work can dramatically increase productivity and help you to get brilliant ideas out of your head and onto the screen more easily.

If you have an iPad Pro you’ll know you can use one with Apple Pencil, but then you often need to carry two devices around for work – one for creating and another for doing. And, of course, Macs don’t even have touch screens meaning they’re unable to be used for the kinds of hands-on creativity that drawing or painting on a display can bring. If you’ve got a touchscreen PC already, you’ll know how useful touch can be.

HP’s ZBook series is designed for uncompromising performance on the move, use the latest Wacom Pen technologies alongside a matte touchscreen designed to feel like paper. They’re, also certified for Adobe Creative Cloud and have the very latest hardware to boot including 10-bit displays with over a billion accurate colours thanks to HP’s DreamColor technology that’ll give you accurate colours from screen-to-screen and screen-to-print.

HP’s colour technologists have endured that colours on screen as true to life as is possible.

EMR (which stands for Electromagnetic Resonance) is a professional-level technology that’s best for digital artists. It’s also used in Wacom devices such as the Wacom Mobile Studio Pro.

The digitiser is the screen, meaning there’s no delay in responding to your stylus movement and it can also crucially tell the difference between pen and touch input, which you’ll notice especially when zooming and moving across and image. The pen itself is passive, so doesn’t need to be charged. It's also lighter in the hand as a result of having no battery, too.

There used to be numerous issues with EMR, such as cursor drift - the distance between the pen tip and where the cursor is registered by the digitiser on screen - but these issues have been resolved by device manufacturers, mostly due to improved display technologies.

AES (Active Electrostatic) is still plenty good enough for designers and photographers to use – the digitiser reacts to the pen tip itself. As the name suggests, the pen itself is active so needs power.

HP’s Pen is self-charging, responds instantly with near-zero latency and has 4,096 levels of pressure so you’ll always feel like it’s doing exactly what you want it to.

So why should you use a stylus?

1. Easier to do the basics

With a stylus, it’s way easier to open apps, move files, change settings - yep, all the basic stuff you have to do with a much less natural trackpad. It’ll be quicker to do it with an HP Pen, trust us. You can even type with it using the on-screen keyboard, too.

2. Get to know Windows Ink

Windows Ink is the software that enables you to use your HP Pen to do more than create in particular apps like Adobe Illustrator. It also means you can write and draw notes in apps like Microsoft Office OneNote or any other apps that support inking. You can also use the built-in apps in the Windows Ink Workspace. These include Sticky Notes, Sketch Pad as well as Screen Sketch to draw on the screen. And then there’s Microsoft Whiteboard, which is a freeform canvas for your ideas.

3. Easier to move from idea to sketch to final work

A stylus makes it much easier to get your ideas onto the screen and share them with others. Sketch and send so you can get feedback at the early stage you need, rather than later when too much work has been done and you need to backtrack. And, of course, you can easily incorporate ideas you receive from others, too.

With a stylus or pen, you can be more accurate in your creativity. HP’s Wacom EMR pen responds instantly as you move across the HP DreamColor display and has 4,096 levels of pressure sensitivity meaning you can get the accuracy you want with zero latency. Advanced tilt detection means drawing or painting using it gives you similar results as if you were holding a brush, pencil or pen.

Sending work to others has never been so easy. Annotating images, screenshots, documents and even emails means you can give contacts a clear idea of what you want from a project. No longer do you need to type reams to express a creative idea - just do it on screen.

Choose the stylus that's right for you

So which of the two stylus types should you go for? Well if you're after the best experience as a digital artist, then go for EMR. The Wacom EMR pen from HP will give you supreme accuracy and, because the dual-digitisers can tell the difference between touch and pen input, it really is a better experience if you're doing that kind of work on a day-to-day basis. That said, the Wacom AES pen from HP will be more than enough for many; the pens are still extremely accurate for everyday use.

HP’s ZBook series of workstation PCs are designed from the ground-up for power, portability and creativity. Explore the HP ZBook range.