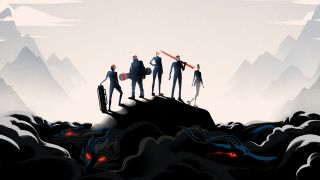 Today sees the launch of the 2018 Winter Olympics held in Pyeongchang County, South Korea. The games see 92 countries come together to compete in 102 events in 15 disciplines, with the opening ceremony broadcast to over 200 countries.

The BBC has been building up to the start of its 2018 Winter Olympics coverage in the UK with a campaign centred around a distinctive animation. Called 'The Fearless are Here', the campaign is the creation of creative agency Y&R London and animators Smith & Foulkes at Nexus Studios.

In a breathtaking animation style, it shows athletes competing against surreal and supernatural challenges in their race to the top. Watch it below.

The animation will run throughout the whole of the Winter Olympics, which ends on 25 February. Thanks to its fresh visuals and original approach, 'The Fearless are Here' has captured the imagination of viewers. We caught up with Y&R chairman and creative director Mark Roalfe to learn how this amazing campaign came to life.

How did the project come about?

Mark Roalfe: We have worked with the BBC as their lead creative agency for over 10 years. We have a history of doing amazing animated spots for the broadcaster. In the past, we’ve won numerous awards including three BAFTAs and a Cannes gold for animation. The aim was to deliver another outstanding campaign for one of the biggest events on the BBC Sports calendar. Every time we set the bar higher and higher.

What was the turnaround time?

MR: We started to work on the brief with the BBC in January 2017 and came up with the idea of playing with fear. In truth, the Winter Olympians put life and limb in danger like no others, so we wanted to show the fears they have to face and conquer in order to succeed.

We considered the best way to capture the personification of fear and decided that a modern 2D animation style would give us the most freedom to create the physical and especially the psychological fears faced by the athletes.

Following creative development, we began speaking to animation directors in the summer. When Smith & Foulkes were on board, we worked closely together with them and the BBC to develop and agree a 2D animatic initially, which established the timings and movement of each scene.

Alongside the 2D animatic, design frames were developed and then animated, which fed into the 2D animatic. The animation progressed a bit further each week until December.

[Music supervision and production company] Native and [sound design and audio facility] Factory also worked closely with us from the beginning of the process to help create the most impactful film that we could. It was a collaborative, non-linear, creative process from the beginning until the finished film aired in January 2018.

How did the animation's distinctive look develop?

MR: With animation, we could be quite surreal. We imagined what’s going on in the athletes’ minds, beyond the physical challenges they face. Once we had this idea, we explored the different fears faced by all athletes and also those faced in individual sports to come up with the most arresting images that visualise these fears.

We looked into film sequences from Hitchcock to horror, and we also researched fear-based dream imagery.

What was the thinking behind the art style?

MR: We used animation for the Winter Olympics as it allowed us to show the athletes performing at a fantastical level that the camera could never capture, as well showing perspectives not possible in reality. It also allowed us to use creative licence as none of the actual events have happened yet.

We wanted to develop an artistic animation style that had some Korean influences but also allowed us to make the athletes look heroic.

Some Korean art we looked at fed into the colour palette and the dynamic brushwork style. The simple pared-back colours helped add to the edginess of the dream sequences.

We created a painterly animation style for this campaign, veering towards a traditional hand-drawn, grainy 2D animation look and away from an overly polished computer-generated animation but with a thoroughly modern feel.

Within the limited colour palette, transitions from light to dark were used to add mystery and depth to the film as well, and help build anticipation.

What was the hardest part of creating this animation?

MR: Getting the sound and music right is a big part of every film but especially so in animation: music and sound take the visuals to another level.

For this film, we used sound to enhance fear and make it even more surreal and edgy. Sound and music build atmosphere and create emotion around the athletes’ struggles through to their final triumph when they have conquered fear.

Additionally, the inclusion of Korean-influenced drumming helps answer the challenge to locate these games in Pyeongchang.

Time is always the most challenging part of any animation process, as we have to adhere to strict schedules. The only footage available is what has been drawn, so the action and the edit have to be agreed by everyone very early in the process.

The finish is probably the most important part when it comes to getting an amazing end result. The final finish makes the quality of the animation stand-out, and we had to make sure we’d built enough time into the process because we knew the date of the Opening Ceremony wouldn’t change.

We’ve worked with the BBC over several Olympic campaigns and they’re fantastic at pushing us, and helping keep the whole process running on rails with their approval process to achieve the highest standard of work that we can.