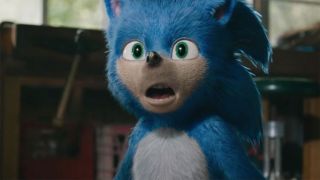 Thanks to leaps in technology and tools, we can do incredible things with CGI nowadays. As filmmakers start using CG more and more enthusiastically, in more and more movies, we are reminded by the speech by Dr. Ian Malcom in Jurassic Park: "Your scientists were so preoccupied with whether or not they could, they stopped to think if they should."

We know more about how to create effective CG than we ever have done before, yet we're still faced with abominations such as the recent disturbing trailer for Cats, with its uncanny valley human-cat hybrids and creepy snaking tails.

There have been other examples where the unbridled application of CG has resulted in visuals that range from bizarre to incomprehensible to just plain bad. The ’90s and ’00s were riddled with them, from The Mummy Returns’ Scorpion King to most of the effects in the risible Indiana Jones and the Crystal Skull. Here are some recent examples of CG gone wrong…

Long before it had even arrived in cinemas, the Sonic movie had fans in uproar, thanks to some bizarre design choices. The spiny, stick-legged character of video game lore was replaced with something that would look more at home in Cats. It’s not bad CG per se, but it’s that uncomfortable combination of human-like expression (plus human teeth) grafted on to some mutant animal body.

It’s like they went into the uncanny valley and out the other side. That, plus it just doesn't really look like Sonic, more like a cheap Chinese knock-off. The outcry – and accompanying memes – was so great that the release date has been postponed (twice) to give Paramount Pictures time to completely redesign the character.

02. The Hobbit: The Desolation of Smaug

Now we’re big fans of The Hobbit movies. Yes, they’re over-long and a bit rambling, but they’re full of exciting action and generally a fun watch. However, they are guilty of overusing CG, and they also look like movies where the VFX budget has been stretched to breaking point.

There are particular low points, like the barrel-riding sequence, which is overloaded with clumsy CG (and also intercut with GoPro footage which sticks out like a sore thumb). But our pick is the scene in which the dwarves pour molten gold all over Smaug the dragon. The entire sequence looks super-fake and destroys all the good work Weta Digital did in creating Smaug in the fist place. Plus it doesn't even scar the beast, let alone kill him.

When the scheduling of Mission Impossible: Fallout clashed with reshoots for Justice League, someone in the VFX department was tasked with removing Henry Cavill’s moustache, which had to remain in place. A simple task you might think: they de-aged Samuel L. Jacksons for Captain Marvel; they created realistic simians for Planet of the Apes; heck, they made an emotionally engaging CG Gollum nearly 20 years ago.

However, the end result was Superman looking like he’d been stung on the lip by a wasp, or was wearing one of those masks from Bo’ Selecta!. It’s terrible CG work, and to make matters worse, a guy online did the same thing with a $500 PC, and did it way better (below).

What, the Black Panther? The Oscar-winning film that delivered the first mainstream black superhero, garnered endless praise and took a billion dollars at the box office? Yes, that Black Panther. We know it's a good (if not great) movie, but the VFX work is surprisingly variable.

The war rhinos in the big battle scene really bring the whole thing down to earth with a lacklustre thump, and the supposedly climactic fight between Black Panther and Killmonger is reduced to two besuited CG models duking it out, with no real weight or emotional connection. Contrast that with the fight between Tony Stark, Captain America and Bucky Barnes in Captain America: Civil War; there’s still a lot of CG involved, but it has so much more impact.

There’s really one major VFX scene in Baywatch, so you can happily blow the entire budget on it, right? It also involves fire, which was once terribly hard to simulate, but now you can do it, practically real-time, on a mid-range PC. So quite how it looks so bad here is anyone’s guess. The flames are all so fuzzy and floaty that there’s never any real threat of danger. This is the perfect example of where a few dollars spent on some gasoline and a box of matches would have been the better option.

Sigh… where do you even begin with this? Alex Proyas’ mythical fantasy film is awful on every conceivable level – acting, script, pacing – but the visual effects are surprisingly bad for a movie that boasted a $140 million budget and employed the likes of Iloura, Cinesite, RodeoFX, UPP and Tippett Studio.

Perhaps it’s the fact that almost everything is shot against green screen with tons of CG backdrops and characters added afterwards; it’s possibly too much work, even for a budget of that size. And while the general quality is pretty average, there are several scenes – such as the Minotaur battle presented here – which has visuals so glaringly fake that most video games would be ashamed of them.

The prequel to Star Wars: A New Hope features some astonishing CG; the destruction of Jedah and the battle for Scarif just two examples of the stunning work by ILM. But when it comes to the digital recreations of Peter Cushing and Carrie Fisher, things don't look so good.

Grand Moff Tarkin is mostly effective as they have him lurking in the shadows, but the final pivotal scene, in which a young Princess Leia receives the plans for the Death Star is just weird. You recognise the character, but the odd discrepancies between your memory of the cute, spirited princess and the CG-enhanced double (played by Ingvild Deila) are just too much, and the result is jarring if not downright disconcerting. Despite hours and hours of footage and thousands of press photos (plus Fisher was still alive at this point) we can't believe ILM got it so wrong.

This is a slightly controversial choice because ILM’s VFX in the Transformers series is, almost without exception, amazing. But (and we can level the same complaint at any of the movies) the CG is all just too much: too dynamic; too hyper-real; too confusing. Every battle between Transformers and Decepticons is a swirling, clanging, bewildering mishmash of spinning cogs, pumping pistons and splintering shards of metal.

It’s all beautifully choreographed and rendered, but no one has any idea what’s going on, mainly thanks to Michael Bay’s hyperkinetic directing style, who thinks more is most definitely more (plus the film had six credited editors!). By comparison, check out Travis Knight’s Bumblebee, which is far more sedate, yet has the highest review scores of all the Transformers films.