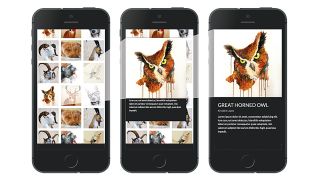 UI animation can be an incredible asset in user experience. Mobile developers know this all too well. Mobile app animations are a core part of the experience, rather than an afterthought. However, on the web, animations are commonly seen as ‘the icing on the cake’, and are omitted as they are deemed unnecessary, excessive or too complex to implement. Worse, animations that lack meaning can detract from the UX.

In this tutorial, we’re going to learn about a certain category of meaningful animation that you might be familiar with; one that enhances the user experience.

When moving from one view to another in a mobile app, focal elements often smoothly animate from one position to another between views. Examples of this include:

But there’s one nagging issue when it comes to implementing these animations: how do you smoothly animate an item between two views or states when there are actually two separate items – one for each view?

Now we’ve outlined the FLIP principle, let’s put it into practice. Let’s say you have a scrollable gallery of images. When one of those images is clicked, it seamlessly moves and expands from its initial grid position to its final full-width position. The CSS for the grid gallery is based on Flexbox:

To calculate the positions, there is a useful JavaScript DOM node method called .getBoundingClientRect() that returns the size and position of the node, relative to the viewport. Thankfully, it also takes scroll position and transforms into account, so no extra maths is needed to calculate its actual position.

This will return an object instance of ClientRect , containing: the top , bottom , left and right positions, plus the height and width , all in pixels.

Because of the .getBoundingClientRect() method, the FLIP principle is particularly useful when you don’t know exactly where an element is going to be positioned on the document. This Flexbox layout is a good example of this, as a gallery item can be positioned on any row.

The position might also change, based on the gallery’s scroll position.

Because of the dynamic nature of elements positioned by various layout algorithms (such as relative positioning, floats, inline layouts, Flexbox, the upcoming Grid spec, and so on), CSS animations would not be the most appropriate choice for transitioning two similar but distinct items between views.

Before the views change, use .getBoundingClientRect() to store the position of the shared element in its first position.

Then use the same method to immediately calculate the last position of the element once the view changes.

From this point, all that’s left to do is a little mathematics, in order to create the illusion that the element is smoothly transitioning from one view to the next.

Let’s say you have the following first and last positions, using .getBoundingClientRect() :

From this we can calculate a few things:

Always apply translations before scaling, as scaling before translating affects the element’s position and can produce unexpected results. The final inverted transformation will be transform: translateX(150px) translateY(100px) scale(0.1388) since, in this case, scaleX and scaleY are equal.

All that’s left to do now is execute the transition. Here we will be using the Web Animations API, though you can use your favourite JavaScript animation library, such as GSAP or Velocity. The transition will go from the inverted transform to no transform (i.e. the original position):

Thankfully, there are a few tools and resources that you can use to get up and running quickly with FLIP transitions. Paul Lewis of Google coined the mnemonic FLIP in his wonderful article, ‘FLIP your animations’ (netm.ag/lewis-285). He has also created flipjs, a helper library for creating FLIP animations with the GreenSock Animation Platform or requestAnimationFrame (netm.ag/flipjs-285).

If you are using React, you may find the React Flip Move library by Josh Comeau useful (netm.ag/ comeau-285). This will allow you to simply nest
all items you want FLIPped inside a

Though not specifically about FLIP, Google’s Material Design guidelines on motion are also indispensable. They describe how motion should be simple, cohesive, and meaningful, and most of their examples can be achieved using FLIP transitions.

Now you understand the FLIP principle, you can tweak the functions we’ve covered here to meet your own needs. Play around with the durations, timing functions, transitioning multiple items simultaneously using FLIP, and even orchestrating more complex, creative animations.

This article was originally published in net magazine issue 285. Buy it here.