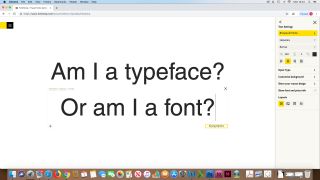 At online outlets like FontShop you can test out fonts belonging to typefaces such as Helvetica (Image credit: FontShop)

The font vs typeface debate is a reminder that industry terminology changes gradually over time. Most of the time, the two words are used interchangeably and it’s not a problem. But, at a technical level, the words ‘font’ and ‘typeface’ do have distinct meanings and – depending on the context – if you use them incorrectly, you may get caught out.

With this in mind, let's take a look at the history of the words font and typeface in relation to typography and graphic design, and settle the debate once and for all.

Don't care about the nuances and just want some fonts (or was it typefaces?), see our post on the best free fonts.

Font vs typeface: What's the difference?

The main difference between a ‘font’ and a ‘typeface’ is that the former exists as part of the latter. Helvetica is a typeface – a complete set of sans serif characters with a common design ethos. However, it is made up of a whole collection of fonts, each in a specific weight, style and size, with different levels of condensation as well as italic versions.

Because most designers are used to working on Macs, where you install fonts and then select them from the Font menu, we tend to use the word font in daily discourse, but if you are asked by an executive creative director what font you’ve used in a project, it’s possible they want to know the precise details. Helvetica would be the typeface chosen for the project, but the font might be Helvetica Regular 9 point.

In certain contexts – not just when you’re talking to a typographer who is a stickler for accuracy – knowing the exact font is critical. When coding an app for a specific type of display, adhering to a particular font selection may lead to optimum legibility.

Brand guidelines (see our favourite example style guides) are another case in point with identity designers choosing typefaces in certain sizes and weights to support the brand aesthetic they want to portray. In the world of packaging, there are consumer protection regulations to adhere to. For example, EU law stipulates a minimum size for the text in the nutrition declaration.

However, in most circumstances even experienced designers alternate between the two and we’re not ashamed to admit that it even happens right here on Creative Bloq.

“It’s probably sacrilege but I’m not sure I’ve ever known the difference,” says Dave Sedgwick, founder of Studio DBD in Manchester. “For most people these days, the terms ‘font’ and ‘typeface’ are often used interchangeably and most clients probably don’t know the difference either so when we’re presenting directly to them we use simple, straightforward terminology that doesn’t suggest we’re attempting to overcomplicate things.”

And he’s right. Usually it doesn’t matter, but when the distinction is important it might help to look at it like this. We choose a typeface because of its common aesthetic qualities. Then we refine it down to a specific font by setting its size, weight, style and sometimes the character set such as Roman, Cyrillic or Greek when we use it. For example, you might love the typeface Futura because of its modernist look, and so the font you used for the captions on your site is Futura Condensed Extra Bold 8 point. If the font is the song, the typeface is the artist.

Font vs typeface: A history

The difference between a font and a typeface has its roots in the history of printing. The word font itself comes from the Middle French 'fonte', meaning cast in metal. Printers cast complete sets of metal letters to make up a font. Fonts with a common design made up a typeface. In a box containing a specific font were two cases – one for capitals and one for small letters – which is where upper and lower case comes from. Blocks of text were assembled letter by letter to form a page layout, which was then rolled with ink and pressed onto paper to make prints.

With the advent of digital typesetting, much of the hot metal terminology was maintained, but the context and the possibilities changed completely. In pure computing terms, there actually isn’t any distinction between a font and a typeface. If you have the Helvetica font data installed on your computer, you’ll be able to render the entire typeface. Each letter is completely scalable, based on the same vector formulae. A traditional typesetter might have had a font labelled Times Roman 7pt back in the day, but on your Mac the size isn’t important because your font file will contain all the data needed to change it in an instant.

The reason we focus on fonts today is largely as a result of desktop publishing and word processing applications, which have a Font menu. When you click it, you get a list of typefaces to choose from – Arial, Baskerville, Caslon etc – and from there you set the specifics of the font – Medium Italic 16 point, for example.

When he wrote The Visual History of Type, published by Laurence King in 2017, typographic designer Paul McNeil of MuirMcNeil avoided using the word ‘font’ to describe anything before the digital era. “Instead I referred to the embodiment of type in metal with the word ‘fount’ in order to be accurate,” he says. “The book’s editors would not accept this word, probably correctly: typographers can be too myopic.”

Ironically, although it irks typographers that people mix up the terms font and typeface, people today actually know far more about type than ever before thanks to their computers.

Font vs typeface: Does it matter?

Whether it matters in the industry is a different question. “The distinction between the two definitely serves a purpose,” continues McNeil, “but only for those who understand what it is – typically people who have trained in graphics, typography or type design. In my experience, typefaces are either indistinct or invisible to many people so most terms of reference are irrelevant.”

Take the discussion outside of the English-speaking world and things get even more interesting. Copenhagen studio Sweet Sneak has a multinational team that includes Germans, Austrians, Danes and Dutch creatives. When we asked them about the distinction between ‘font’ and ‘typeface’, it sparked a wider linguistic discussion. “The terminology in our native languages is a bit different, maybe even more finely nuanced than in English,” says Brini Fetz, co-founder and creative director.

“If you want to express yourself precisely it is important to distinguish between the two terms, but we still tend to use the word ‘font’ in daily office language. The term ‘font’ in Dutch and German often refers only to the digital version of a typeface, so it gets even more complicated when you look into what the terms mean in different languages.”

Whether someone says ‘font’ or ‘typeface’ isn’t as important as how they actually work, according to Sedgwick. “I’m more interested in how designers think than I am in about whether they are entirely clued up on all the relevant terminology. I believe a good attitude and a genuine desire to learn or find things out is more important, and I’m not even sure design students are being taught the fundamentals of type in the correct language these days anyway.”