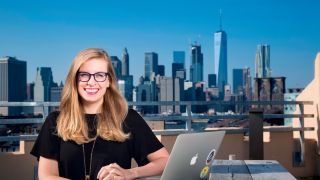 Designers who frequent the web conference circuit may well recognise Lara Hogan’s face; she regularly takes to the stage to share performance advice at events. However, recently she’s branched out into a new topic – and a brave one at that: the secrets of successful public speaking. “I cannot tell you how nerve-wracking it is to get up there and try to tell people that they can be good [at presenting]!” Hogan smiles. “I gave the first version of the talk last week and it was definitely intimidating.”

Although Hogan is a pro now, her start in public speaking was not as smooth. “For my first conference ever they had sent me an email to invite me and I was like, ‘Woah, I wonder how they got my information? This is pretty massive. They must have read my blog posts or something,’” she recalls. “Then when I was standing by the side of the stage and they were introducing me, I realised that the biography they were reading was definitely not mine.”

To this day, Hogan’s not sure who the organisers confused her for. Add to this the fact that just a couple of days before the event she realised she’d been scheduled for a keynote rather than a track talk, prompting a last-minute rewrite to make her presentation broader and more accessible – and a cringeworthy moment when an audience member asked a question that Hogan thought was a joke (it wasn’t) – and it’s a wonder she ever returned to the stage at all.

“Yeah, it was awful and terrifying. And it definitely was ... how do I put this? A good learning experience,” she laughs. “I tried to look at it like OK, how could I prepare differently? What could I learn about what to ask the organisers about what they want out of the talk before I write it? Those kinds of things. To try and make sure the next one was going to be way better.”

Watching Hogan on stage now, it seems there’s hope for us all, and that’s the message she’s trying to get across in the book that accompanies her talk: Demystifying Public Speaking. When researching what others had written on the topic, she found they tended to assume some kind of privilege, and take for granted readers would have a topic in mind and be comfortable on stage.

“I realised there’s this huge opportunity to help people who either suffer from Impostor Syndrome or in general find that getting up in the spotlight comes with a lot of risks,” she explains. “I wanted to write a book that was helpful to anybody who wanted to get into public speaking but, for a variety of reasons, feared it.”

Sadly, the stakes for some speakers are higher than others, and as a woman Hogan is still firmly in the minority on most event lineups. And just like any other underrepresented person in the industry, she’s seen her fair share of discrimination.

She tells us a story about a time when she presented a keynote in front of 2,000 people. She was pleased with her performance, but over the next few days of the event several male attendees came up to her and made comments – not about the content, but about her tone.

“They said I sounded too rehearsed, I was too poised, that I sounded like a school teacher... And it took me a few days to realise this feedback was actually probably very gendered.” None of Hogan’s male friends who’d spoken at the conference had received any feedback like that.

After giving it some thought, she realised that a lack of diversity within the industry was to blame. “If I look like an anomaly; if I’m up there not in a T-shirt and jeans telling jokes, then of course it’s going to be a little bit startling for folks in the crowd. And so what I’m hopeful for is that we can start to celebrate a more diverse range of speakers; different ranges of talking, of style, of content... of all the ways we could possibly be different on stage.”

Alongside her new talk on public speaking, Hogan is still regularly sharing the web performance insights she picked up during her four years managing engineering teams at Etsy.

For a site like Etsy – an online marketplace for handcrafted and vintage products – the performance requirements are specific. Not only are users coming from all over the world, so new tech and speedy connections can’t be relied on to do the legwork, but images are also extremely important. And the impact a lot of images can have on a website’s performance is well documented. Thankfully, the team has got it down to an art.

“That means making sure you’re using the right format, not shipping too many at the same time, compressing things correctly – but not too much because Etsy sellers, especially, know when we’re compressing images below an acceptable quality,” Hogan lists off. “We have a bunch of ways to make sure our images still look good but aren’t totally dragging down the page”.

However, it’s not the technical part that Hogan thinks is the biggest hurdle, it’s making other people – your boss; your boss’ boss – care about performance too. “If at the end of the day you’re the only person doing performance work, you’re not going to be very successful. That site is not going to stay fast. ”

The key, she says, is figuring out what the people you’re trying to convince do care about, and then explaining how performance work can help them tackle those things. So if they want return visitors, you can show them studies that prove better performance prompts more people to come back.

Or you can appeal to their competitive nature, and show them how fast your site loads compared to a competitor’s. Hogan’s favourite trick is just to show management and colleagues videos of how fast their site loads over a 3G network, to really make them feel their users’ pain.

In September 2016 Hogan was promoted to engineering director, and she now manages other managers, who in turn lead teams of developers. “My job used to be figuring out a roadmap and things we should do to tweak the website to make it faster or something. Now it’s much more coaching,” she explains. “I’m helping teams set their missions, but really they’re coming up with them on their own.”

Whereas performance goals are easily checked off – we need to get page load time down to two seconds; we need to fix this bug – gauging the success of managing people is much harder. “It’s so hard. It really does feel intangible, especially because when you make a decision you often don’t know the impact until months later,” she explains. “You may not know for years if it was successful or in what ways you spectacularly failed.”

The solution Hogan found was to develop what she calls her “spidey sense” – an internal barometer of how each day has gone. So even in the absence of concrete figures or facts, she can evaluate whether she has made the right calls.

“Over time I started to develop a better spidey sense of team meetings, and I started to learn indicators for how people display that they feel safe – things like lightheartedness, laughing, giggling. Also people feeling comfortable to ask very strange questions,” she says. “So I started to note ways in which my team were displaying they felt safe, or needed to feel more safe. And those are also things I started to use to measure my own work.”

Another useful antidote to the ambiguities of managerial work, Hogan says, is the physical activities she pursues in her spare time. “For me, strength training means I’m physically working towards some goals, and measuring my success so much more tangibly than I can in my own work, ” she enthuses.

Much of Hogan’s work hinges on great communication, and strength training has helped her in this respect too. “Being a member of an underrepresented group in tech, and sitting at a table full of a bunch of white dudes, means that there are many dynamics happening in that room. And if I’m feeling physically strong and like I’m achieving my own goals, then I’m able to sit at that table very differently.”

Ask Hogan what her biggest communication challenge is and she won’t say tackling the boardroom or standing up in front of a thousand conference attendees. It’s the one-to-ones with the people she manages that really keep her on her toes.

“You can’t have an off day and hope they walk out of there feeling any better than when they walked in,” she says. “The most challenging part is learning how to be vulnerable and honest, just so they know you’re human too.”

This authenticity is something Hogan has given a lot of thought to, and there’s a section dedicated to it in her new book. In a speaker context, it can help you make that vital connection with your listeners, but it comes with risks, especially for minority speakers. “Authenticity is something that we crave, but can also make us unsafe, and I don’t want to be hugely vulnerable when I’m on stage, ” she explains.

Over the years, she has come to the conclusion that appearing authentic on stage is enough. There’s no need to actually bare your soul; if you communicate clearly and aren’t robotic in your delivery, your audience will still trust you.

“It’s OK to have a persona on stage. It’s OK for Lady Gaga to be Lady Gaga. It was OK for Bowie to be Bowie, right?” Hogan smiles. “Who we are on stage is naturally going to be a different person than who we are in real life.”

This article was originally published in net magazine issue 289. Buy it here.