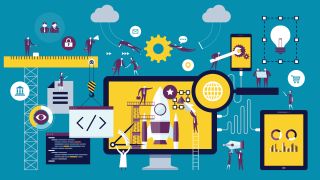 Ask a graphic designer or illustrator who their heroes are, and chances are they'll reel off a list of famous names plus a smattering of unknowns to make themselves look cool.

Of course, the world of web design has its fair share of heroes and leading figures as well. To help spread some web design inspiration, we asked seven designers and developers which individuals helped to shape their career choices.

"A lot of different people have inspired me at various stages of my career," says Anna Debenham, frontend developer at Snyk. "Over the past few months, I’ve been looking up to Lara Hogan’s work in particular. She manages lots of people as part of her work as an engineering director at Etsy, and has published an incredible book, Demystifying Public Speaking, based on her years of speaking experience. Plus she can lift some really heavy stuff, and I love how she celebrates achievements with doughnuts."

"There are a few design studios that I’ve been following from the early days of my career whose work I admire and who are excellent at sharing knowledge, be it through writing or speaking," says Inayaili de León Persson, lead web designer at Canonical. "Clearleft and Happy Cog are the names that come to mind straight away when referring to web design. When talking about more traditional studios that inspire me in a visual way, I’d have to say Wolff Olins and Huge."

"Creatively, my inspiration is Eric Jordan," reveals creative director Shane Mielke. "He showed me how important it is to stand out with an individual style and encouraged me to make my own. My work ethic is inspired by my parents, Fred and Jane Mielke. I grew up seeing how hard they worked on our family ranch, and in their careers, to provide for me and my sister. My mental toughness is inspired by my high school football coach, Jim Hartigan. He taught me how to shut my mouth, put team goals above individual ones, and work harder than I ever thought I could.

"My ability to put up with unrealistic deadlines, egotistical bosses and crazy clients all came from tough love and the lessons he taught me."

"I frequented music message boards in my teens, and I found inspiration from peers who made things just because it interested them," says senior digital solutions architect and consultant Sally Jenkinson. "People used whatever tools and methods worked, sharing and learning from each other. From BBCode to HTML, CSS, JavaScript and beyond, my experience writing about music, uploading photos and customising MySpace led me down a web development rabbit hole. Central to this was my friend Matt, who gave me a copy of Designing With Web Standards. The people I surround myself with still inspire me the most to this day."

"I've followed Jessica Hische’s career since before she started the Daily Drop Cap and I’ve always appreciated having a talented female designer to be inspired by," explains web designer and frontend developer Katherine Cory.

"I saw her speak at New Adventures about ‘procrastiworking’ – the idea that the work you do while you procrastinate is the work you should be doing. I didn’t really understand it until last year, when I made time for personal work. I’m excited to explore this more, have it feed back into my commercial work and see where it all leads me in 2017."

"Julie Howell, who runs a multiple sclerosis support group that helped me when I was diagnosed, and opened my eyes to the fact that anyone could use the web, regardless of disability, geography or hardware," says web developer Bruce Lawson. "Then Jeffrey Zeldman, Eric Meyer and the original Web Standards Project people for their work persuading developers and vendors that standards are the way forward. Also Ian ‘Hixie’ Hickson for revitalising HTML and showing that not breaking the web matters more than theoretical purity.

"And finally, everyone who’s ever blogged an article or tweeted a tech tip, sharing their knowledge freely with their peers to make the industry a better place for all."

"Nick Campbell of Greyscalegorilla, who’s a fantastic motion designer," says designer, consultant and author Dave Ellis. "I really like the way he’s forged his own career, doing the things he wants to do. He talks openly and frankly about how he got started and has always been quick to share his knowledge with others. There are few people who ever admit to not being a great designer at any stage in their career. Hearing Nick explain how he overcame this will always be an inspiration for me."

This article was originally published in net magazine issue 290. Buy it here.