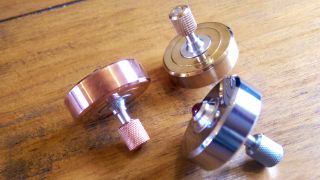 The spinning top that features in the movie Inception, used by Leonardo DiCaprio's character, Cobb, has become an iconic piece of cinematic objet d'art since the film's release in 2010. In this sci-fi thriller the spinning top is used as a totem, a device that helps establish whether Cobb is in his own reality, or an alternate one (if it continues to spin impossibly, Cobb knows it's the latter). And when the movie reaches its dramatic climax, it's this humble spinning top that provides one of cinema's greatest cliff-hangers.

Fast forward to 2016, and a burgeoning interest, in some cases, an obsession, in the design, craft, and physics behind spinning tops has emerged. Inspired by Inception, these beautifully crafted tops are now being produced across the world, by artisans who are looking to create an object that excels in functionality and engineering, whilst also being a stunning piece of art in its own right. (A company called ForeverSpin has even recreated the Inception top.)

If you're the kind of person that buys a laptop, and appreciates the engineering and man-hours that have gone into the design of its hinges; or if you marvel at the smooth yet deliberate action of a nine-step watch movement as it sweeps through sixty seconds, collecting tops could be for you.

As with most areas of the maker movement, spinning top designers are an eclectic bunch, made up of traditional metal workers, artists, hobbyists, product designers and jewellery makers. But what they all share is a passion for marrying aesthetics, balance, and performance in a desirable collectable where, at the premium end, people are willing to pay hundreds of dollars for a single top. For example, this collaboration between artist Chris Bathgate and spinning supremo Rich Stadler of BilletSPIN.com sold for $900.

Other premium makers are also coming to the fore, with the likes of Gavin Sexton selling his tops for hundreds of dollars, and all via randomised auctions on his Dynamic Inertia Tops Facebook group, which now boasts 2,000 members. Sexton uses a selection of different metals, treated in various ways, to bring out breath-taking colours in his work. And if you're looking for a top that's going to turn heads, Sextonís are definitely up there with the best.

You don't have to break the bank

Whilst some tops sell for hundreds of dollars, there are other makers looking to make the world of  tops more affordable, whilst maintaining the high quality and spin times that collectors have come to expect from more exclusive models. One such enthusiast is Will Cutler, an English product designer and jewellery maker, who caught the spinning top bug back in 2015.

Cutler set up a Kickstarter campaign for Vorso, his spinning top company, in November of last year, and by December he had smashed his target. He then turned to the manufacturing phase of his project, and began production of his first top: the Vorso Mk1.

"In November 2015 we set out to make a precision engineered, performance spinning top, with great design and market leading spin times," says Cutler. "After a successful Kickstarter campaign, the Vorso Mk1 became a reality. We gained the support of over 240 backers in over 15 countries, we even reached our funding goal in the first 32 hours, something that we are very proud of."

Each of Cutler's tops comes with it's own display box, and a certificate with a maker's number. And for between £36-£62 you can get tops made in brass, copper or stainless steel (with a choice of three contact points in steel, ceramic, or ruby).

We were able to get our hands on some of Cutler's tops, and they don't disappoint. The intricate detailing and flawless design make these objects desirable design pieces, as well as great spinners. (And if you ever want to try and explain the theory of inertia to someone, these tops are a great way to do it.)

And despite us being completely new to the world of spinning tops, we were able to get one of Cutler's tops to spin for almost nine minutes, which you can check out in the video below. And we also made it to the end of this post without a single Dead Or Alive pun, which deserves some credit even if our spin technique isn't quiet there yet.