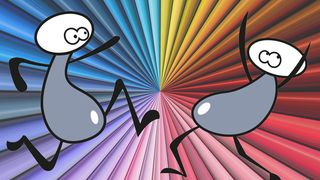 Animation tools are a key part of the process for a digital artist, game developer or character designer. There's nothing cooler than seeing your static images animated. Whether it's a simple animation or a full-length cartoon, adding movement to your illustrations gives them a new and exciting dimension.

But stepping out of your comfort zone of static images and into the world of digital animation can be intimidating. There's so much to learn (starting with the 12 principles of animation) and so many tools to choose from. Where do you start?

In this round-up, you'll discover some of the best tools for creating 2D animation, with an emphasis on gaming, from pixel art to vector-based graphics. So what are you waiting for? Let's get moving!

Want to be as good as Studio Ghibli? We can't promise that, but we can at least hook you up with the animation tool it's used to make the likes of Spirited Away and Howl's Moving Castle, and customised along the way.

Ghibli started using Toonz during the production of Princess Mononoke, and in 2016 this powerful animation tool was made open-source and renamed OpenToonz (there's still a commercial version – Toonz Premium – available, if you insist on paying). It features all the tools you're likely to need, from drawing tools through to effects, scripting, tweening and more, and new features are added regularly.

The latest version, 1.4, has just been released for Mac and Windows, adding a new stop-motion panel with support for Canon DSLR cameras, and plenty more. And as well as OpenToonz, there's a further open-source version, the Morevna Edition, which is also available on Linux and includes additional features such as assistant guides to make it easier to add perspective to your environments, integration with the MyPaint brush engine, a horizontal timeline and an advanced colour selector. If you're not sure which version of OpenToonz to go with, we'd recommend this one – especially as the documentation for the basic OpenToonz seems to be only in Japanese.

Piskel is an online tool for creating animated sprites and pixel art. It's easy to use and requires no sign-up. However, if you're interested in creating a gallery, whether it be public or private, you can do so by signing in with your Google account.

With Piskel, you get a live preview while you're creating your image. You also have the option of importing PNGs, JPGs, BMPs, and animated GIFs. Or you can import .piskel files, the proprietary format for Piskel. On the export side, you have options for animated GIFs, PNG spritesheets, or a zip with each frame rendered out as a PNG.

This is an online tool, but there’s also a download available for Windows, Mac and Linux.

Another great pixel art and animation tool is Aseprite. This app has everything you'd expect from a larger publisher, including layer support, onion skins, playback modes, alpha channel control, shading modes and custom brushes. Like Piskel, you can import and export a variety of formats, like PNGs, spritesheets and animated GIFs.

Moving out of the realm of pixel art, Spine allows you to animate your already existing artwork. That's right – there are no illustration tools included in Spine. However, because it's such a powerful animation tool, it's absolutely worth a look.

Spine gives you all of the tools necessary to animate your characters, including a dope sheet and a Free-Form Deformation (FFD) tool. The dope sheet gives you a detailed look at the timeline where you can make tweaks to the animation's timings. And with the FFD tool, you can transform individual mesh vertices and deform your image.

This cross-platform 2D drawing and animation app is great for bringing your hand-drawn animations to life. Thanks to its lightweight design, Pencil2D lets you focus on the art and animation, not the interface. It supports both raster and vector, and has options for importing and exporting different formats.

Like Pencil2D, FlipBook is another contender if you're looking for a graphics app to create traditional 2D animation. FlipBook lets you draw, scan, and import things like backgrounds, cels, overlays, and even movies. You can also add sound. When you're done, you can export still images or the full, animated movie.

Another powerful, cross-platform, open source 2D animation drawing and animation tool is Synfig Studio. Although more complicated than most other graphics apps, Synfig gives you control over almost every aspect of your animation, and provides you with familiar tools like brushes, fills, masking, layers and more.

Moho is a vector-based 2D animation program for beginners (Debut) and professionals (Pro). Both come loaded with tons of pre-made content and characters to help get you started or spark your imagination.

With the Debut version, you can use a character wizard to dial-in things like body proportions and predesigned 2D components. Or you can import your own images and use the autotrace option. For Pro users, you get things like FBX support, motion blurs, frame-by-frame capabilities and more.

Check out this free Introduction to Moho course to get you started.

Moving on to the more 'professional' set of tools, TVPaint lets you render fully animated scenes from start to finish. It uses bitmap technology, so you can animate natural renderings, like gouache, watercolour, oil painting, crayon and pen, traditionally, image by image.

TVPaint Animation is one of the pricier options included in this round-up, but it does offer a trial version, and from what we've seen so far, it's quite powerful and well worth the price. Don't believe us? Take a look at its gallery.

Toon Boom's Harmony, considered by some to be the de facto standard in animation tools, offers three versions: Essentials, Advanced and Premium. You also have three licence options: Perpetual, Monthly (starting at $23/£17 month) or Annually (starting at $15/£11 month).

With Harmony's illustration and animation tools, you can sketch, draw, and paint in both bitmap and vector formats. You also have access to advanced colour palettes, deformers, frame-by-frame animation, and special effects.

If you're looking for software to help with audio lip-syncing for both Sprite-based and Morph-based characters, or 2D facial and body puppeteering, Cartoon Animator has you covered.

Previously known as CrazyTalk Animator, it's available in two flavours: Pro and Pipeline. The Pro version will get you started with basic timeline editing and G3 character templates, but to get the full benefits of creating your characters directly from PSDs, you'll need the Pipeline version. Both versions include support for importing images and videos in a variety of formats.