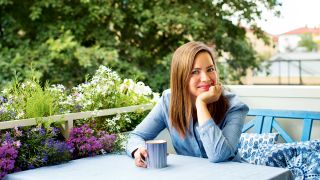 By her own admission, Ida Aalen is a very impatient person. "If I see something that doesn't work, I get an urgent need to fix it," she laughs. "It's almost a problem. When I see tourists on the street holding their map upside down, I have to go over and help them."

It's hardly surprising, then, to learn that Aalen is a champion for user testing, both in her day job as senior user experience designer at Oslo-based digital design agency Netlife Research, and in the wider web community. "Some problems are more messy and complex than others," she explains. "Strategy is a way of digging into what the problem really is – what is it that we really want to achieve? And user research is a way to make sure we're fixing the right problems in the right way."

In May, Aalen's article 'Never show a design you haven't tested on users' received widespread praise when it was published on A List Apart. In September she's set to explore the topic in more depth at Generate London, arguing that testing can be a key strategy for winning new work, and offering practical tips for fitting it into even the most resource-stretched projects.

As Aalen herself points out, everyone knows the best way to make sure your designs work is to test them with real users – so why, if user testing is so self-evident, does more of it not happen? "People think it's more expensive, more difficult and more time-consuming than it really is," she explains. "Sometimes there's maybe a fear of finding a weakness in our designs. But I think we should embrace this as designers, rather than thinking our designs should be perfect from the start. If you find a weakness in your design, that means you did your job: you found it."

Where user testing becomes particularly important, she says, is in weeding out the trickiest usability issues. Best practice rules and past experience will take your designs a certain way, but they won't expose the 'unknown unknowns'. "These are the things we don't see, often because we have too much background knowledge," she explains. "The saddest thing is that if you never test, you might never find out that a project is actually failing; that the conversion rate could be a lot higher if you had just fixed some tiny details."

One of the most interesting aspects of Aalen's stance on user testing is that it doesn't just come into play once a project has been given the go-ahead: it can also form a fundamental role in the pitch process. In her A List Apart article, Aalen recalls how her team restructured a meeting with a long-time NGO client by performing a quick usability test on the proposed design for a new sign-up form, and in doing so convinced the stakeholders of their ideas.

Instead of showing the design first, the team began by presenting the results – a canny move, given that the client already had a sign-up form that worked "quite well". The discussion that followed could then centre around ideas for improving the design, rather than nitpicking issues that hadn't caused problems in the test. Aalen remembers it as one of the best client meetings she's ever had.

But this approach isn't just applicable to existing clients; it can also be used to win new work. "We've set up a weekly lab day where people can drop in at short notice, so we've been able to show clients how real users interact with their existing website in the very first meeting we have," she explains. "It's an approach I'm a lot more comfortable with than the sort of pitch work that is sometimes done."

Is there a danger designers could spend too long testing an idea that a prospective client hasn't yet signed up to? "The key is to make the smallest thing necessary for you to be able to test it," she advises. "Just throw something together that realistically shows the specific thing you want to test, and hold off the fine-tuning until after that first test."

Of course, this means entering the initial stakeholder meeting without having a comprehensive plan. But, Aalen emphasises, that's OK – even if it feels uncomfortable at first. "When discussing something we've already identified as an actual problem, the client's input has been very fruitful and valuable. Showing up with some unsolved problems lets the client become more involved. And it's a time-saver in the long run. The testing lets us focus on the things that actually need to be improved in the design."

This summer marks six-and-a-half years for Aalen at Netlife, which she describes as a friendly, zealous and non-hierarchical place to work. When we catch up with her, she's about to be promoted to head of communication – the next logical step in a career that's seen her circling content from a number of different angles. Despite landing her first paid web design job (from her mum) aged just 12, she went on to study industrial design, and later communication and media studies at university, before working as a journalist for two of Norway's largest online newspapers.

Looking back, she says it's now clear that these detours would eventually lead to UX. "I just didn't know about the role of UX designers until I was 21. I thought you had to be a programmer or a graphic designer to make websites," she smiles. "However, working as a journalist left me with a firm belief that content is at the core of UX. My colleagues sometimes refer to me as a closet content strategist."

Right now, Aalen's busy working with the Norwegian Labour Party to redesign its website ahead of parliamentary elections in 2017. "I'm having a blast," she says. "I guess I imagined political parties being a bit bureaucratic, but it's the opposite. It's turned out to be kind of a dream project, where we get to do things the right way. We're continually testing to make sure we're heading in the right direction."

Aalen's colleague Jørgen Blindheim, who is in charge of design and frontend, is working very closely with the developers at Appresso. There is no prototype; everyone on the project – the backend developers, the frontend designer, UX designer Aalen and the content strategist – is committing to the same repository.

Aalen is happiest when she's working in close, interdisciplinary teams. One of the first projects she was proud to work on was The Great Norwegian Encyclopedia (SNL), in 2011-2012. "It was seen as a relic from the past," she recalls. "It's like the Norwegian Britannica, and everyone had doomed it because of the rise of Wikipedia. But there are only around five million Norwegians, so, with our tiny language group, the Wiki approach can only get you so far."

Part of a small but tight multidisciplinary team, Aalen helped create a responsive website with a new identity and editorial strategy – and today the SNL is still alive and kicking. "More and more contributors are joining, all the Norwegian universities have chipped in and are using it as one of their main platforms to distribute their knowledge, and Norwegian schoolchildren and students are using it every day."

She continues: "I think the point I'm trying to make is that I would make shitty websites if it weren't for the fact that I again and again have had the chance to work with people who are both nice and brilliant."

Outside the day job, Aalen's been teaching user research and UX at IGM for a number of years now. One of the most common testing errors she sees is the wrong questions being asked, with researchers often accidentally leading interviewees towards a certain outcome through the way they phrase their questions. For example, if you ask someone if they can find the menu button on a page, you've already told them that there is a menu button. The secret, Aalen says, is to ask questions that give users a reason to find their own way. For instance: "Can you see if there's anything here you would give as a birthday present for someone you care about?"

For teams faced with very limited time and resources, she recommends guerrilla research as a killer strategy. "Go where your customers are and ask them. When we tested the new map for the Norwegian Post, we just went down to the post office. When testing for the Norwegian Labour Party, we went to the Central Station in Oslo with our hands full of chocolate and an iPad. If you combine these face-to-face meetings with some online tests, you'll get a lot of insight without breaking the bank."

With this insight we can help tackle one of the biggest challenges facing the industry. "It's too sad how many websites feel like they need a redesign just three years down the road," she reflects. "I'm hoping our business won't be like this in just two or five years; that ideas like module-based design and the focus on governance and continuous testing will mean that what we deliver doesn't turn obsolete so quickly."

In the meantime, she'll be working on her work-life balance. "The biggest lesson I've learned is that work isn't everything. I wish I realised it earlier," she says. "I love my work, but to be able to do my best – and to be happy – I need to have a life outside work. Nine to five, Monday to Friday. That's enough."