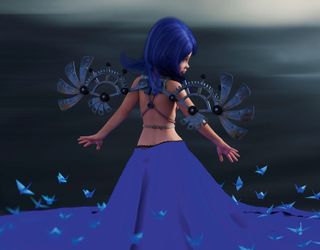 Moving between programs can be confusing. I tend to stick to four food groups – Cinema 4D, ZBrush, DAZ Studio and Marvelous Designer – to keep from going insane. Every program has its quirks and I seem to run into them all.

I primarily work in Cinema 4D, but often move my characters in and out of DAZ Studio to take advantage of the many clothing options and features, and especially the vast posing options. Many people have asked me how I move back and forth between the two programs whilst keeping the exact same character position, scale, and world coordinates/settings.

For this image, I used DAZ Studio to pose my character and add the hair. The character was originally modelled in Cinema 4D and imported into DAZ Studio. Cinema 4D was also used to model the wings, harness, and the origami cranes (the dress and underwear are made with Marvelous Designer). I found myself moving back and forth between Cinema 4D and DAZ Studio a lot as I tried to model just the right pose for the wings.

The four-step process I present is the result of countless hours of trial and error.

To get from DAZ Studio to Cinema 4D, start by clicking Export in DAZ Studio. Choose Wavefront Object (.obj) as the Save as type. On the .obj Export Options dialogue, select the Cinema 4D Preset from the drop-down list.

Next (and this is important), checkmark Invert Positive Direction under the X axis. The last thing to do here is to Disable Write Surfaces – unless you plan to render in Cinema 4D and need the textures to transfer over.

To open the .obj file in Cinema 4D, just click on the normal Open option on the file menu. Select the .obj file that you exported from DAZ Studio. The .obj Import dialogue will appear.

Choose the Default preset from the drop-down list and make sure to uncheck Flip Z Axis, if it is checked (this is another important step). Click OK and you should see your object in front of you, loaded in Cinema 4D.

To export from Cinema 4D back to DAZ Studio, click Export on the Cinema 4D file menu and choose Wavefront .obj from the list. Give your file a name and the .obj Export dialogue will appears. Choose the Default preset from the drop-down list and double-check to make sure none of the axis options have a checkmark next to them. Click OK to export the file.

Back in DAZ Studio, click Import from the file menu. Locate the file you exported from Cinema 4D and click Open. The .obj Import Options dialogue will appear. Choose the Cinema 4D preset from the drop-down list.

Make sure the scale is 10000 per cent. I still haven't figured out why it needs to be 10000 per cent, but that's what seems to work. Next, make sure to check Invert Positive Direction under the X Axis option and then click Accept.